It has become apparent in the last few days that in light of the result to leave the EU, some of our industry’s biggest companies have taken the decision to raise their prices. This is something that fabricators and even installers may already being seeing.

Does this statement look familiar: 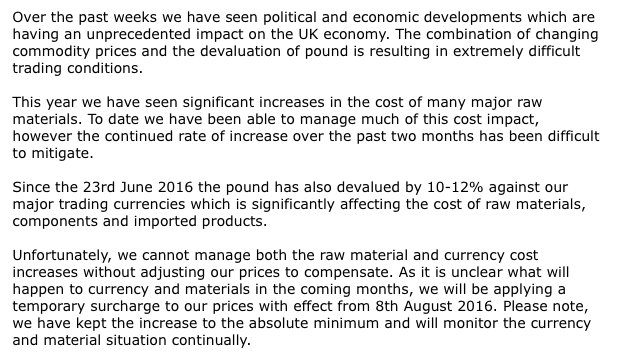 I reckon quite a few of us have seen a letter or two like this in the last few days. And in fairness you can understand why some companies will be wanting to pass on their price increases. For those who buy their raw materials in dollars, they will have seen their costs rise quite a bit in the past few days.

Companies who bulk buy their raw materials in 6-12 month batches won’t see an immediate increase. But companies who buy on shorter term contracts will, and as the statement above suggests, this rise is fairly significant.

We’re talking about companies here though that buy their raw materials from outside the UK. This isn’t the case for every window and door manufacturer and sysco. What about the ones who produce and fabricate here in the UK?

The beginnings of a price war

There are already a few companies sharp enough to have realised that their British made window and door products won’t suffer price increases. After all, if everything they make is sourced and produced here, import costs from a weakened pound won’t affect them.

This is going to create a clear divide between companies who are choosing to put their prices up and those that are not. And we’re talking about significant price increases here. Not just one or two percent. We’re talking seven to eight percent, if not more.

So you can imagine the immense selling point for companies who make things here. They will be using this to their advantage, going out to the installer sector and promoting hard the fact that they’re not implementing price increases. In a time of instability and rising costs, this will be a very tempting factor for a lot of installers.

The pressure will then be on suppliers to keep their existing installers on board. Are their customer’s loyalties strong enough to withstand, say, a 10% price increase? I would estimate that for a large number, increases of amounts of this type will be a step too far, and will force them to look elsewhere in the market, and at companies who haven’t put their prices up since the Brexit vote.

Lets be clear, this could be a battle that will get feisty, and perhaps quite ugly. The companies who are not going to raise their prices are going to be very vocal about this fact. They are going to put extreme pressure on the companies that are in order to steal new business away from established clients and bring them over to their platform.

In return, companies who are having to pass on increases are going to need to fight tooth and nail to keep hold of their existing customers. As I have said above, price increases of this size will force some installers to go elsewhere, so there is a risk that companies will lose installers and revenues will drop as a result, a double whammy.

There is the potential for this to build steadily over the coming weeks as the industry splits quite rapidly between the two camps. There will be wars of words between companies and personalities, there will be business won and business lost. I suspect those syscos and fabricators based in the UK will fare better in the coming weeks and months.

Either way, this is going to be a key area to watch in the short to medium term, and one that could get very volatile.