Can Review Save Entu?

Can Review Save Entu?

I would characterise the trading conditions in the past few years in our industry as fairly steady, if not positive. There have been plenty of shocks outside the industry which could have derailed us, but I think we ave remained fairly resolute in the face of things.

Growth has been good. Mergers and acquisitions have been plentiful. Sales records are being regularly broken at many companies. Yet, in areas there does remain problems. One of our flock with problems is the home improvement group Entu. For those who are not familiar, they provide windows, doors, conservatories and boilers as well as other products via their group of ten companies. They’re a major player.

However, they have been in difficulty for some time now, and last week a major review was launched by their board, with the help of KPMG, in a bid to turn the company around.

But can it? And if they can’t, is this a signal of weakness in the industry that perhaps we have been turning a blind eye to?

Take a look at this Bloomberg chart of the Entu share price over the past five years:

From a high of nearly 145p per share a few years ago, to a measly 11p today. That is a dramatic fall in a relatively short space of time, and illustrates the problems Entu have had recently. It’s worth noting that at their high, the group had a market valuation of £66m. It’s a lot less than that now.

Unless you’re Apple, most companies who lose this much share value unfortunately don’t stick around for much longer. In a report on Insider Media published last week, Entu announced that they had taken on KPMG in a bid to help turn the business around. They want to explore ways to raise new capital, explore new options for long term financing and to “establish interest in certain parts of the group”, which in other words means to try and sell off the various brands held within the group.

The brands in the Entu group include:

Some very well known names in the window and door industry in there. It may be the case that KPMG may try to find buyers for each of these individual subsidiaries. Spin off the most valuable, try to get as much cash in an attempt to shore up the core business.

But, with the group share price worth almost nothing now, and national-level businesses the first ones to struggle when consumer confidence takes a dip, as it is doing now, who is realistically going to be interested?

The fact KPMG are now involved is a sign for me that things may already be in motion to bring things to a close. Naturally, the board will explore every possible way to save the business, as it right. But when you look at the share chart above and see how far it has fallen, it may be a near impossible task to restore things to any sort of respectable level. Just take a look at the share price chart for Lehman Brothers before they went bust. It’s not pretty.

What’s worse, other large companies are already starting to pick the bones from the company already. Take a look at this post from the Head of Talent at Everest on Linkedin: 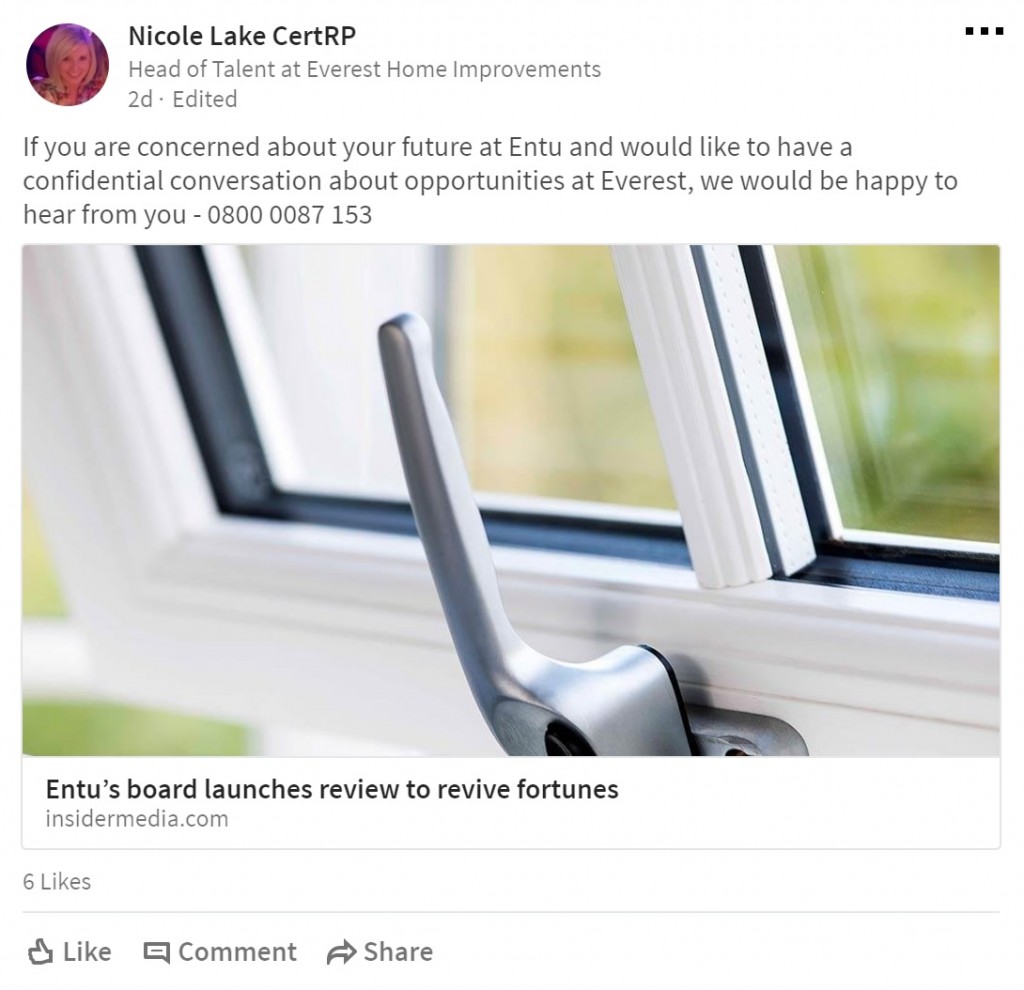 No mucking about there by the guys at Everest. It’s worth bearing in mind that for those who work for Entu and the companies in the group, this will be a worrying time. Many may already be looking for new jobs.

Can it be saved?

It’s a hard task. I was speaking with a friend of mine earlier on in the day and we both agreed that when the economy becomes a little bit more uncertain, and consumers become a little more hesitant and less confident, it is always the big companies in our industry that seem to suffer the quickest and the worst. The smaller, more agile companies who can change, who offer a higher end option to the right demographic can often do well in turbulent times.

For a group the size of Entu it may be impossible to save the group in it’s current guise, or even at all. There are some big national companies in the mix, including the likes of Zenith and Weatherseal. You can think of companies like these as your typical nationals. The usual business model. Large, rooted in the archaic ways of selling. In an age of very savvy home owners, more careful spending and a high end part of the market only getting stronger, how likely is it that these are sell-able chunks?

I believe that the Entu story is part of a bigger one. One which I want to explore further in another post. But, in my conversation with my industry friend of mine, we discussed that in times of uncertainty, like this, it is the bigger companies who get hit biggest and fastest. It’s the nationals that rely on a type of demographic of home owner that can quickly become hesitant if the economic outlook looks a bit grey. The people who still have mortgages to pay, families to feed, things to worry about. If that group stops spending, the nationals get hurt. And from various sources, sales at the very biggest companies do not look good at all this year so far.

On the other hand, smaller, more nimble, higher end installers for example can do quite well. The types of installers who attract a different demographic. Perhaps the retired, entrepreneurial, business focused types who have money to spend, whose mortgages are paid off, who are more discerning when it comes to big ticket purchases. I like to think our family business is like that, and I can confirm that we have set another fitting crew on just this past week. I hear similar good things from other similar sized businesses.

Can Entu be saved? Possibly. Is it likely? I would say unfortunately no. As an entity it’s not an attractive buy, with potential very hard to find given the current climate. As I said, I believe there is a bigger story at play here when it comes to the nationals, which I am going to explore on here in the coming days.

Things might be about to get a little rocky.