Ever wondered if the world of politics and sanctions could ever have real-time effects on the window and door industry? Well, yes they can.

This is a story about President Trump, tariffs, and a Russian aluminium company called Rusal.

You cannot have missed the recent talk about a trade war between America and some of it’s biggest competitors and enemies. The US and China are in a bitter battle of threats about what tariffs they are to implement against each other, including steel, soy beans and everything else in between. It’s got observers nervous.

But US v China isn’t the big player in this story. No. It’s the new Cold War and US vs Russia. A couple of weeks ago the US announced a raft of new sanctions against Russia and it’s oligarchs. Many of whom reside in London. Seven people to be precise were targeted. And these seven people either part-owned or owned 12 of Russia’s biggest commodity companies. Upon the announcement, the Russian stock market nosedived, as did their currency, as did the shares in the 12 companies targeted.

It was one company in particular however that has commodity markets spooked, and that is a company called Rusal. Or to give you it’s full name: United Company RUSAL Limited. They are the world’s second largest aluminium companies by output. So you can imagine the panic when America decides to take aim at what it an absolutely key player in the world’s supply of aluminium. And panic it did, sending the share price of Rusal plummeting, and the price of aluminium on the LME rising rapidly to a seven year high: 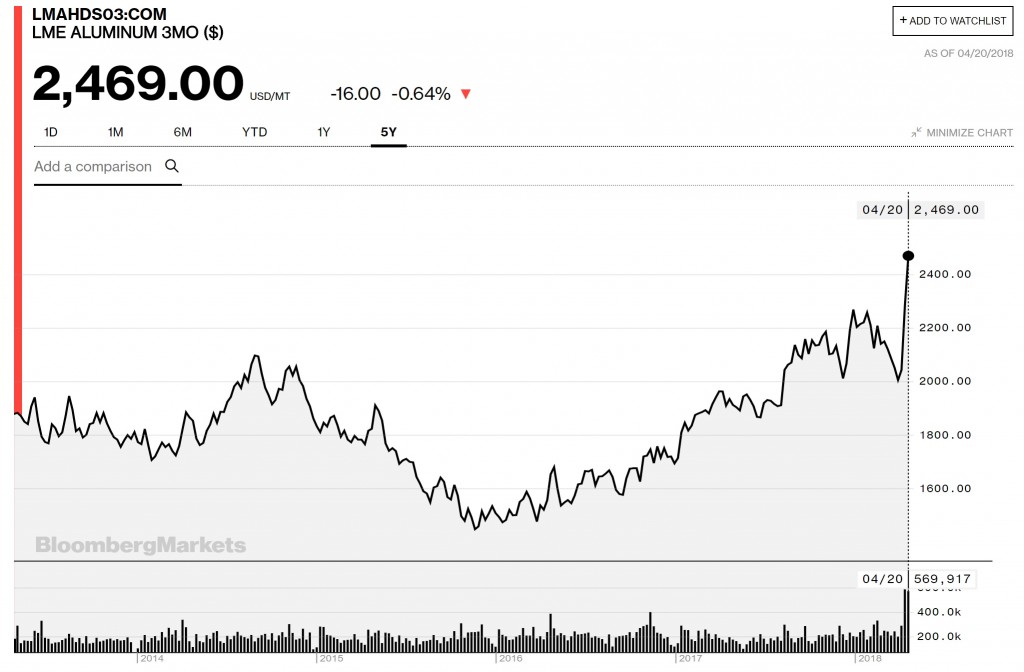 That is a five year chart. The price of aluminium has been on a steady rise over the past few years, but steady is OK. The world can cope with steady. What the world cannot cope with is huge swings in price that cause the supply chain to be squeezed and ground to a halt because of it’s rising value.

As it happens, aluminium has come down from it’s highs a few days ago, and stands at $2448 per ton on a 3 month contract. That is still very high in comparison to just a couple of months ago.

Anyway. That’s the story of where we are with the price and why it’s risen so steeply. But what does it matter to us as the window and door sector? As it happens, quite a lot.

I have spoken with a friend of mine in the industry, more specifically the aluminium side of it, and he explains that behind the scenes the aluminium sector is fearing the worst. He told me that the high price of aluminium has made it so valuable that there are stories already of shipments going missing at sea.

He also mentioned possible shortages of the raw material. If so, this spells bad news. As we know, when the raw material price of something goes up, the customers further down the supply chain end up having to pay for that rise. Well, this isn’t a small incremental rise. That chart above shows that. These are huge swings in price and someone has to pay for them. Ultimately, that means the companies who buy it, make it and fabricate products out of it. In our case, we’re looking at the whole aluminium window and door industry, both residential and commercial, as well as other associated sectors such as parts extrusion and profile reinforcement. Lets be clear, the price increases coming are going to be very steep. We’re looking at near record prices for the raw material alone. Add to that oil has been on a rise the past few weeks, meaning production and transport costs have gone up as well.

Price increases aren’t the only issue here. In Brazil last week, another major global aluminium producer Hydro, announced a 50% output reduction ins response to a dispute at it’s nearby refinery in Para. The Rusal sanctions make things even worse. The US sanctions on the company forbid it from exporting aluminium to most of the rest of the world. It also exports the material to other major aluminium manufacturers such as Alcoa, which then provide products to the rest of the supply chain. So, if the world’s second biggest exporter of aluminium suddenly cannot export, we get shortages. I’m already being told of plans to shut down factories and source supply from China, who seems to be the only place in the world right now with easily accessible aluminium.

Back at our level, this is pretty much a worst case scenario. Sharply rising prices plus material shortages. If I’m an aluminium systems company and fabricator right now I’m going to be pretty nervous. Given the popularity of aluminium at this moment, in both residential and commercial fenestration markets, this is seriously bad news. No doubt that many suppliers are already looking at their price points to customers and will be considering how much to raise them by to cover their own rocketing costs.

It was perhaps easy to assume that the aluminium window and door market was impervious to most things. Even Brexit hasn’t dented it’s progress. Yet, here we are, blindsided by a trade war and new Cold War very far from these shores. If geopolitics doesn’t calm down soon, you have to wonder if a toxic mix like this could kill off the renaissance in residential aluminium. It’s already at a higher price point than PVCu. But when the raw material price alone rises by more than 20% in two weeks, you have to question at what point would home owners decide how much is too much?

This is a story that despite it’s massive influence on our industry, has been woefully under-reported elsewhere. I shall keep an eye on this aluminium story over the coming days and as it develops further.