This is a sponsored article by Camden Group

An eco-friendly product that can warm up a room quicker than normal has been unveiled – and it’s made entirely from recycled plastic waste including plastic bottle tops! 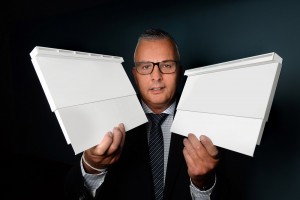 Award-winning inventor Keith Rimmer is launching Thermocill – a simple, easy to install, cost-saving way of redirecting heat in a room – at the FIT Show at the NEC in Birmingham from May 21-23 Stand R30.

Thermocill is a device that is placed under the window board and above the radiator in a room. Thermocill directs natural convection from the radiator to help create a wall of warm air immediately in front of the internal side of the glazed window preventing heat loss and cold air entering the room.

Keith has teamed up with Brian Lavery, of Camden Group – one of the largest independent manufacturer and supplier of uPVC windows and doors to trade customers in the UK and Ireland.

Brian, whose products are made of 80% recycled materials, will have the sole rights to manufacture Thermocill in the UK and will offer licence agreements to chosen suppliers.

Thermocill, patent pending (No 1820279.6) and trademarked, is aimed at the housing market and can be fitted retrospectively in any existing home or to new builds.

Mechanical engineer Keith, who won an Ernst & Young North West Entrepreneur of the Year Award for Green Tech and Energy, said: “Thermocill is manufactured from plastic waste including plastic bottle tops and when operating doesn’t use any form of energy itself. It is a truly sustainable environmental product with carbon savings all the way.

“It can help you warm up a room quicker than normal providing thermal comfort which means you use less energy. The reason for this is that the re-directed heat targets the cold spot in the room being the double glazed unit, of either your present window or of any new window that may be installed.

He added: “There are three different models, one of which is a solution for a new build to counter the 2025 government signalling to remove gas appliances from new homes. When SAP 10 hits Thermocill will be ready to step in.”

The figures are based on Keith’s own product tests including thermal imaging reports. But Thermocill is currently being examined by experts at Salford University and the Carbon Trust who he believes will confirm his findings, Thermocill even alleviates condensation from the internal glazed unit which is a problem of many newly efficient window systems. 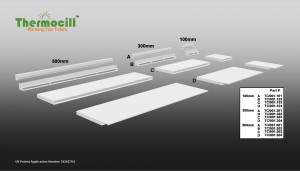 Thermocill extends from 125mm to 250mm fitting the most common size window boards and comes in three width sizes 500mm, 300mm and 100mm, all of which can be used as a multiple to fit the majority of window sizes.

The rear ventilation outlet of Thermocill is also adjustable to allow different thicknesses of decorative window board finishes – timber, MDF, plastic or conglomerate and tiled finishes from 10mm to 26mm.

When Thermocill is fitted apart from the outlet grill at the back of the window board no part will be on show.

The eureka moment when Keith landed on the idea of creating and developing Thermocill happened when he called at a friend’s home for a cup of tea.

The inventor revealed: “I was sitting in the lounge. It was a cold night and I was looking towards the window and noticed the vertical blinds moving. My friend said ‘What’s up Keith?’ and I just said ‘I’ve got an idea!’

Keith said: “I could see the convection of warm air from the radiator was trying to get to the window but it couldn’t get there. I went to my car and got my digital thermometer and took some readings around the window area and within 10 minutes I had the idea for Thermocill in my head.”

He added: “I came into the window industry by accident which was quite costly but eye opening, but also to solve a problem that it had faced for years – heat loss from glazed units.

“When designing a heating system, the major factor was always the size of the window. Specifiers, rightly so, wanted rooms with large windows to allow as much natural light as possible.

“But this comes at a cost. More heat is required in the space so larger heating appliances and emitters are needed to accommodate this plus good insulation in wall cavities, floor

slabs etc. But the cold spot in the room is still there. That’s where Thermocill addresses the issue by creating a wall of warm air.”

Roy Harrison, Camden’s sales manager, said: “We are really excited at the potential of Thermocill which we are convinced could help revolutionise the home heating industry.”

And Keith believes Thermocill will be as ground-breaking as the EcoPod heating system he invented almost 10 years ago. The system achieved huge energy savings and cut carbon production.

It’s not April 1st again is it

As I have been blocked by Keith on twitter, got a few ‘dislikes’ from my ‘April fool’comment and found ten minutes, I’ll tell you my main problem with this product. Quote “Keith said: “I could see the convection of warm air from the radiator was trying to get to the window but it couldn’t get there. I went to my car and got my digital thermometer and took some readings around the window area and within 10 minutes I had the idea for Thermocill in my head.” Now , as far as I can tell , Keith has witnessed the… Read more »