China Glass 2020 Postponed Due To Coronavirus

China Glass 2020 Postponed Due To Coronavirus

The the coronavirus begins to take hold around the world, it was only inevitable before we saw events and gatherings in affected countries begin to be postponed or cancelled. Football matches in Serie A in Italy have been cancelled, there is talk about the remaining 6 Nations fixtures being postponed to later on in the year. Italy’s match with Ireland has been called off officially now. Workplaces are being shut down in London and staff being told to work from home. It sounds dramatic, but in an effort to stem the spread of a virus which is capable of killing people, these are the correct decisions.

The international fenestration industry has also been hit, as it has been announced that China Glass 2020 has been postponed.

Here is the statement provided by the exhibition: 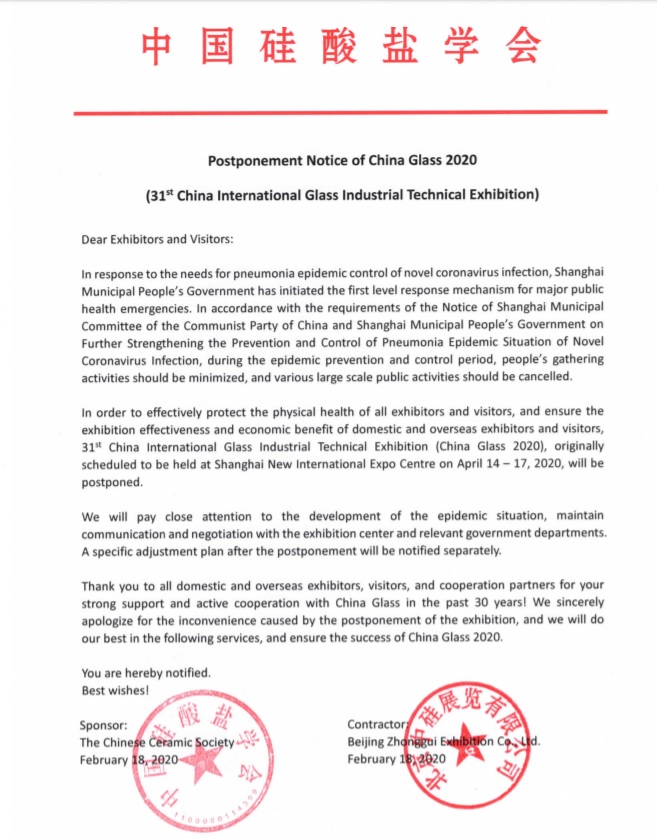 There are some companies operating in the UK with overseas hubs that this will affect. This is a major show for the international fenestration sector, so taking the decision to cancel it, after all the planning and preparation that goes into a show like this will have been devastating for all involved. But, the absolute wider situation has to be taken into consideration, and if it helps reduce the chance the spread of COVID-19, then this is the right call.

Other 2020 shows getting nervous

Whilst the focus has been on China with the coronavirus outbreak, today was the first day where new cases around the world overtook the number of new cases in China. The focus on the outbreak right now has centred in Europe and northern Italy.

With China Glass 2020 being postponed, no doubt the European fenestration exhibitions will be increasingly nervous about their own shows this year. First we have Fensterbau in Nuremberg in Germany in March. Although Germany has had only 19 cases confirmed so far, its the number of people coming from across Europe and the rest of the world, using various transport networks that could increase the risk of the spread of the virus. Hopefully containment measures will keep things under control, but the CDC and WHO have both warned that this is going to spread and the world was caught offguard.

There is also Glasstec in October of this year, in Germany as well. You would hope that by the end of the year the situation would have become far calmer and the prospect of cancelled events is far off in the distance.

Its also worth keeping half an eye on our own situation in the UK. We have had 13 confirmed cases so far, but with lots of school kids returning from northern Italy on school skiing trips, there is a risk of it spreading. Some schools have been closed and some students have been told to stay at home and self-isolate. It is perfectly possible for the spread of the virus to become wider in this country. If it does, what action do we take as an industry with our own domestic events?

There are awards, summits, drinks and gatherings throughout the year, some coming up in just a few weeks and months. Do they get cancelled, in an attempt to reduce the risk? My concern is that simply cancelling events may not in the end prevent the spread. It might slow it down somewhat, but its hard to see not holding events keeping the virus at bay.

We don’t know enough about the new disease as of yet, but as we do over the coming weeks and months we will and we’ll be able to adapt.