After months of teasers, the #Rustique hashtag on social media and various hints dropped by various people, I am now very happy to introduce Rustique 3, an exclusive new triple glazing product by John Fredericks.

To give you a better idea as to what Rustique 3 is all about, take a look at this advert: 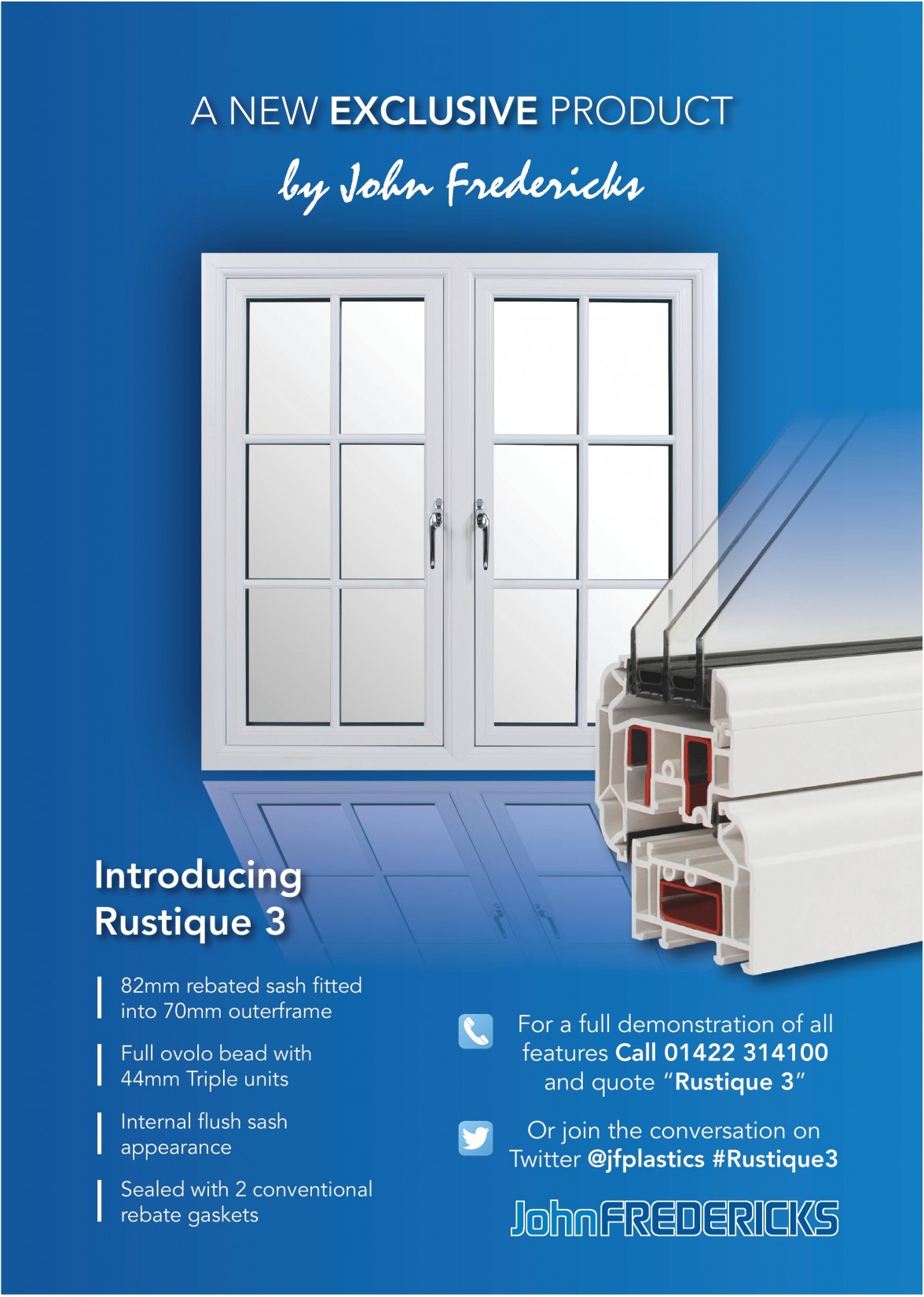 Looks good doesn’t it! This is a product that has been long in the planning and is yet another successful venture thanks to the partnership between Halo and John Fredericks.

I was lucky enough to be shown a very early prototype at the beginning of the year and was excited by what I saw. At the time it was just a 3D printed version, but after seeing the finished article that is ready to go into people’s homes, this is going to herald an exciting new period for John Fredericks and all of the installers.

The problem for me up until now is that triple glazing has felt a bit forced. Lets be honest, sales of triple glazing are not where most expected or wanted it to be right now. That is down to there being so few dedicated triple glazing systems out there, as well as the general public not having much of an appetite. I don’t honestly believe that most installers were sold on the idea either.

There are a few dedicated triple glazing systems out there, but they tend to miss out on one of the most important factors a home owner will consider when buying windows and doors – aesthetics.

This is where the team at John Fredericks, in partnership with Halo, have sat back, soaked in the feedback from the industry, and went back to the drawing board to create a dedicated triple glazing product which would not only appeal to installers, but to home owners too. And I think they’ve cracked it!

One of the biggest talking points is the dedicated 82mm sash that fits into a traditional 70mm outer frame. The sash does the important bit of holding a 44mm triple glazed units, with the 70mm outer frames maintaining easy retrofitting capabilities into people’s homes. After the Triple Glazing Debate last year, we established as an industry that if triple glazing was going to be beneficial over double glazing, the units had to be 44mm. Information clearly observed during the designing of this new product.

Then you have the internal flush sash appearance, an aesthetic detail growing in importance with a lot of home owners, with the whole thing then using conventional rebate gaskets. Rustique 3 has been designed to feel as normal as any other type of window, except benefiting from triple glazing!

Continuation of the Rustique dynasty

Away from the fact that this is a very good triple glazing product, there is one other feature that should make Rustique 3 very popular, and it’s the very fact that it’s Rustique.

If you remember, John Fredericks was the very first fabricator to bring out a fully Sculptured window, called Rustique. It was a huge success and helped to drag the industry from the blocky dark ages to something with a bit more style. The popularity of Rustique gave way to Rustique 2. An improved version of the original series, and again proved immensely popular with installers up and down the UK.

The Rustique ranges have been popular because quite frankly they are the best looking Sculptured frames on the market, with some of the best energy ratings and security performance. This is why so many installers, including myself, have become so loyal to it. Crucially with Rustique 3 it has kept the aesthetics installers and home owners have come to love and rely on. But it now comes with triple glazing that is going to be genuinely effective.

I see Rustique 3 becoming just as popular with installers as the first two versions of Rustique were. I also believe that this is going to be the product that really kicks triple glazing up into the next gear and start to shift some units.

Rustique 3 is currently being trialled and tested in the field by some of their longest established customers, with an anticipated full launch at the end of August.

As the outer frame is 70mm, if you have a side hung next to a fixed (or a top hung over a fixed), do you have to have use two different thickness sealed units within the same window?

To answer Patrick’s Qustion, we at John Fredericks designed the product in discussion with our customers. Most are happy to take the product dummy sashed to give the product the balanced look.
It could be done with fixed lights but it would mean using a different size unit.

Interesting approach, I guess if people are prepared to pay extra for triple glazing the cost of dummy sashes isn’t so much of an issue.
Just need to make sure units are sufficiently/correctly ‘packed’ at install to prevent drop or clash as the gap between outer frame and sash looks tight.
Nice to see something new though.