As we start to settle back at our desks for the coming year, we will all be watching to see which companies make the biggest splashes in our industry this year.

It looks set to be the most competitive yet, in many areas of our sector. New products, new marketing, the FIT Show in May. Not to mention Brexit, the economy and domestic and global politics will all have their influence on how we all do business this year.

This is Part 1 of a two part mini-series of posts where I explore ten companies that we should all be keeping an eye on during the course of this year. Five in today’s post and five in tomorrow’s post. These are based on my own thoughts and opinions, going on performance during 2016, general media coverage, product announcements and general commentary around these businesses. Feedback is very much welcome via the comments section below.

Lets see how accurate this is by the end of this year!

This was a company that was making large waves in the second half of 2016. A buy-in during the summer, the acquisition of WB Group, and then a swap deal with Stevenswood at the end of 2016 made sure Polyframe was a company everyone was talking about.

Once their buy-in was completed, it was made clear that their end goal would result in them going on an acquisition trail. They certainly stayed true to that during last year, and by all accounts, they look like they’re going to be making the same waves again in 2017. Perhaps on a much bigger scale than before.

Either way, Polyframe are a group on a rapid rise which could easily see them become a super-group before the end of the year. Definitely a company to keep an eye on this year, and one that is a pure example of how the industry as a whole is changing in it’s overall structure.

By the DW3 Products Group I mean Solidor, Residence Collection and Window Widgets as a whole. As a group they represent some of the most innovative, forward thinking businesses and products in our industry at the moment. Solidor are top of the pile when it comes to composite doors. Residence Collection rapidly expanded their offering at the FIT Show last year. Window Widgets produce some of the most popular and innovative window and door solutions.

Together, they form a powerful trio. Solidor’s sales were up an impressive 37% last year – you can read more about that here. The Residence Collection now has four systems to offer to home owners, which consolidates their already large industry market share. I expect that part of DW3 to perform very strongly this year. Window Widgets also announced a raft of new products to add to their already comprehensive portfolio. Many of which were on show at last year’s FIT Show. They’re already popular, I expect the business to grow well this year.

As a group, we could also see DW3 expand the group. When it was formed not too long ago, many acquisitions were promised. Some of companies, some of personnel. The market is good for buyers, I would not be surprised to see a DW3 Products Group acquisition announcement before long.

Another major industry player on the move, 2016 saw a smattering of acquisitions by Synseal. On top of that, their WarmCore range of hybrid aluminium windows, doors and bi-folding doors continue to gain in popularity. They also appear to be building up momentum behind their relatively recent acquisition of Masterdor. Add to that their launch of Stratus, their brand new lantern roof offering to installers. They’ve been busy.

They’re on this list for two reasons. Firstly, their product range is becoming rapidly more comprehensive. Existing customers of Synseal will find they have even more to offer to home owners. Secondly, I don’t believe their buying days are done. Synseal are well placed to acquire more businesses to expand their reach during 2017. Whether it happens or not is another matter. It is a buyer’s market though. 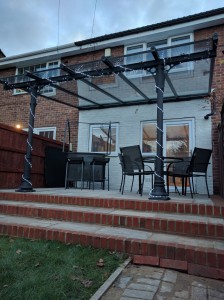 Another company that is on the up in a big way is Prefix Systems. In the very last days of last year they announced they had bought Sussex based Pavilion Systems. You can read about that, along with my thoughts here. This expanded the Prefix group’s sites to five around the country and gave them proper access to the south of the country. It gave them big expansion potential.

But it’s not just the acquisition that has landed them on this list. Their impressive Verandah, of which I own one. Their Opus timber/aluminium hybrid range of windows, doors and glazed roof solutions. Their industry-leading WARMroof solid roof. Their lantern roofs. Their aluminium fabrication. They are now far more than just a conservatory roof fabricator. In fact, they are probably the epitome of diversification in our industry.

Prefix are now incredibly well placed as a fabricator to go through a period of rapid expansion. Their good reputation, high end premium products, and now combined with proper southern representation puts them in a very strong position to steal business away from their competition, and allow their existing client base to grow strongly this year.

In two to five years, I expect Prefix to be a much bigger beast than it currently is. Definitely one to watch.

Morley Glass moved premises in the summer of 2016. This move double their already significant capacity, and now makes them the largest producer of ScreenLine® blinds in the world. That’s some effort. You can read more about that here.

As you can imagine, it takes a little time to settle into a place that was much bigger than the space you were previously operating in. However, with capacity to make 3000+ blinds per week, a central UK location, an expanding product offering and a fair pricing point, in the world of integral blinds, I would expect Morley Glass to make 2017 a very good year this year.

Check out Part 2 tomorrow at 11pm!