Aluminium Prices Fall Back, Is The Panic Over?

Aluminium Prices Fall Back, Is The Panic Over?

Remember not so long ago, when Donald Trump was handing out sanctions left right and centre? It was the sanctions on Russian companies, specifically the ones that make aluminium that caused a particularly worrisome spike in the cost of the industrial commodity. Something that had the aluminium window and door industry feeling rather uneasy about.

There were concerns about supply, how far the price would actually go up. This was all on top of problems with some of the supply coming out of the biggest aluminium exporters in the world, before Trump was handing down his tariffs.

That was back in April of this year, when prices spiked rapidly over $2500 per MT. Fast forward to present day and it’s a much different picture.

Lets be honest, other than in April when sanctions was the viral word, we’ve heard next to nothing about it since. No retaliatory measures. No panic about supply. The reason may well be to do with the price: 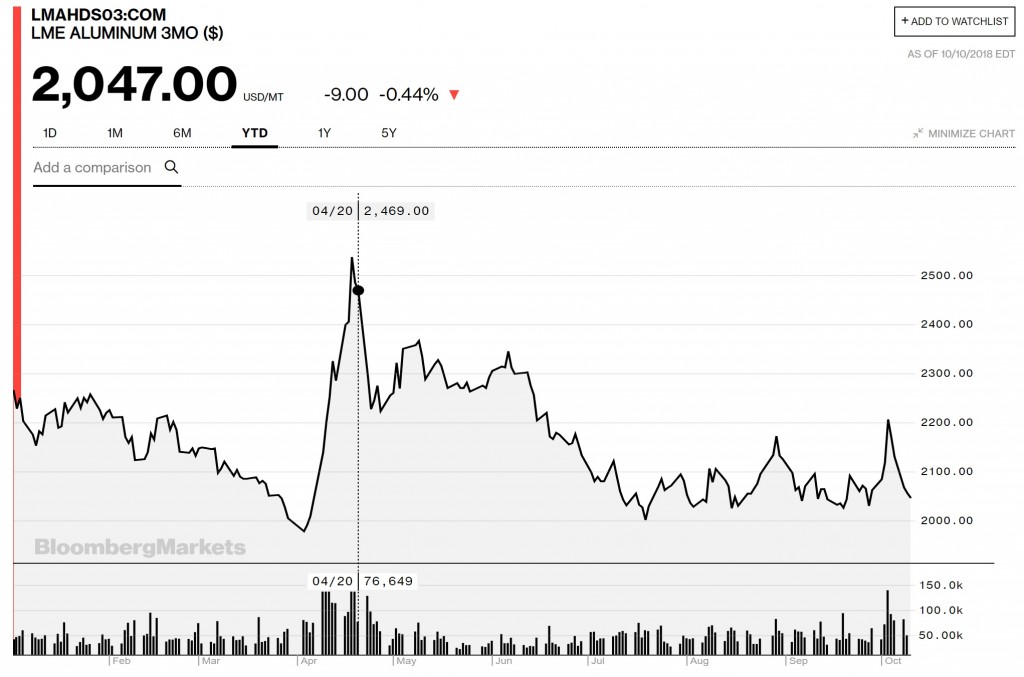 Look at mid-July, as it flirted with sub-$2000 levels. All in all prices have come down in a strong but steady fashion. Spiking periodically when markets look to be a bit rocky, but nothing on the scale of all that April madness.

Prices have come down because the metal markets have digested what was said, what the new reality was, and most likely realised that the world could probably cope with whatever was thrown at them. In this case US sanctions on Russian companies and flaky supply. In most cases, when norms are challenged, as they have been here, the natural reaction is to panic. But more often than not, once the dust has settled and people realise the sun is still going to come up the next day, normality returns.

For the window and door industry in this country, I do think that for now we can pay less attention to what is going on in the chart above. There may well be some residual price increases to work it’s way into the sharper end of the market. But that’s nothing we can’t handle. I think we can cross off lack of supply from the list of concerns for a while as well.

That being said, we’re in the era of Donald Trump and policy by Twitter. Although at this very moment in time things seem calm, I would never discount another round of sanctions, just to keep other countries on their toes.

This seems like a good time to take stock of where we’re at when it comes to aluminium in the window and door world.

I don’t see the growth trend in the residential sector backing down in the next few years. If anything it’s going to become stronger and stronger. Where I work in the UK the demand for aluminium isn’t huge. But even here I can see home interest rising and more quotes are being done in aluminium. Admittedly most of those are slider and bi-folds. It’s not often we quote for a whole house of windows and doors in aluminium. That may change in time.

You can also see the effect aluminium is having across other parts of the market. Composite doors for example, where you have the likes of Virtuoso and the newly announced range of contemporary range of door from Solidor taking design elements from the world of aluminium.

Where I think we’re going to see the strongest growth in the next three to five years is the patio slider. Once consigned to the scrap heap, sliders have returned in a massive way. Offering home owners more glass, more view with a lot less frame. No arguments about it, when it comes to view vs frame against bi-folds, there’s only one winner.

I’ll caution this however. I am still seeing certain companies offering their aluminium bi-folds at a certain amount per leaf. That amount per leaf seems to get lower and lower each time. We must remember not to do to aluminium what we did to the PVCu market many moons ago. We butchered what could have been a highly profitable, reputable and stable new sector. Instead we started a race to the bottom that cut out quality, profit and market stability. It’s only now that this part of the market has recovered. Lets make sure we don’t ruin residential aluminium in the same way.