The fenestration industry rumour mill is in fifth gear right now. Whispers of this, tales of that. One rumour to actually have been addressed today however is the trade speculation that Safestyle UK is to buy SafeGlaze UK. Could this story have any more twists and turns?

Safestyle actually addressed the speculation earlier on today. To deny reports of the merger. Sort of.

The Board of Safestyle UK plc (“Safestyle”) has become aware of certain rumours in the market and confirms that it is not in discussions to acquire NIAMAC Developments Ltd (trading as SafeGlaze UK) (“NIAMAC”) nor to acquire its business or assets.  The Board of Safestyle is however considering certain other arrangements with key stakeholders in NIAMAC that could benefit Safestyle’s business and accelerate its recovery.

There can be no certainty that any formal arrangement will be entered into.  A further announcement will be made in due course, as appropriate.

So, no buyout. At least not yet. And it does sound like they may be looking at certain elements of SafeGlaze, but not all of it.

My guess is that they didn’t want to have to respond to the speculation. If there are discussions ongoing, they would have preferred they stay behind closed doors. They obviously didn’t elaborate on which assets of the company they were looking at, naturally, but I would make a guess that it would be certain assets which would mean the competition is truly negated, boosting chances of Safestyle’s recovery.

News of the speculation had a pretty positive effect on the Safestyle share price: 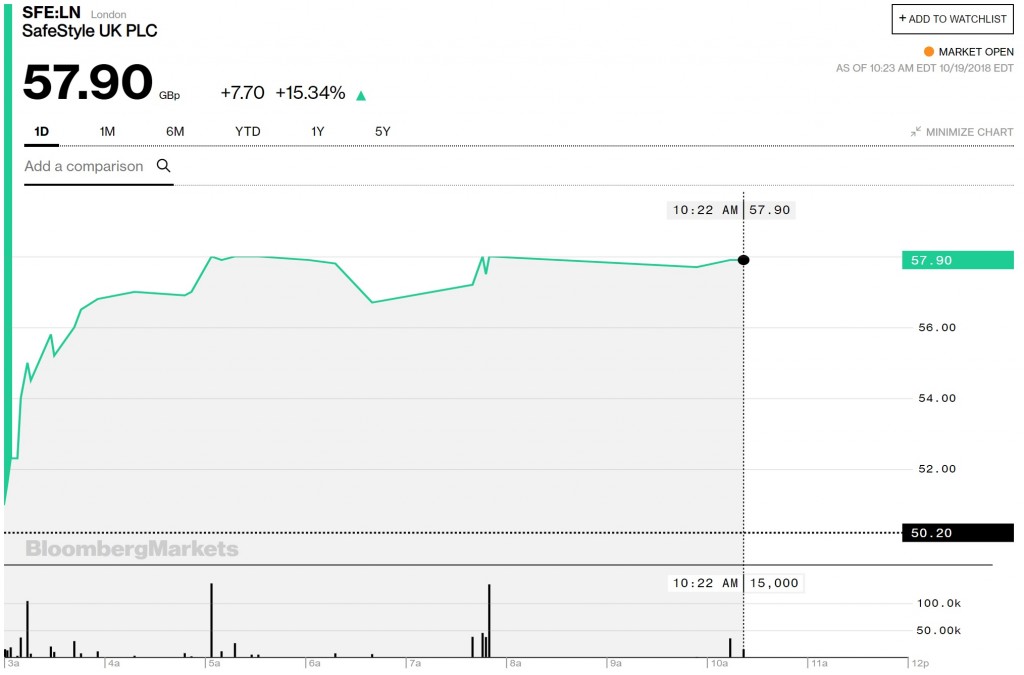 Trading volume wasn’t massive, but at low prices, any sort of volume change can send the prices one way or another.

Should a deal indeed by done between the two parties, this would mark a stunning turn around from only a few months before. From SafeGlaze threatening to totally disrupt Safestyle’s market share, to court, and now to a potential deal between the two of some kind. The deal may well end the threat of SafeGlaze to Safestyle, depending on the assets purchased.

Again, eyes need to be peeled on this story at all times!