A new year and a new decade. The last one was pretty eventful, and there was a great deal of change that took place. Mostly for the better. As we start a fresh ten years, I want to take a look at what might be hot this year in the world of fenestration. I will be making some predictions for the next decade as to what may or may not happen in our industry, but in this post I want to explore the five products which I think are going to be in high demand in 2020.

Although this is a 1-5 list, its not a ranking, merely a short list of products based on my opinion.

I see that trend continuing in a big way in 2020. Up to now, most systems companies have had to adapt products that were born from the commercial market and make them work in the residential sphere. It can mean clunky lead times, lots of waste, a less-than-smooth manufacturing and buying process. That though is going to have to change if the aluminium market wants to make the most of this huge opportunity.

That is the aim of companies like Garnalex, who are a brand new company and are seeking to change completely how aluminium is done in the residential market. They will shake up the industry no doubt in what they’re about to do.

Demand however I see as only growing from the general public. Awareness is rising, home owners understand the benefits of aluminium over PVCu in particular circumstances and it has an easy eco-friendly image too in comparison. Bi-folding doors will remain popular, and most will be sold in aluminium. I think we’re going to see a lot of activity from this part of the market in the coming 12 months, and installers and fabricators would be wise to get on board now and make the most of it.

You may have seen recently that Brisant Secure have extended their range of Sweet hardware by launching their Rose Gold colour. Its a bold move thats not been done before and personally I think it looks amazing. It will add a new dimension to doors of certain colours that would be in need of detail to really lift it. 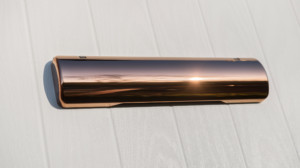 Usually when a new hardware colour or finish is launched its barely makes the radar of most companies in fenestration. Rose Gold though might be the exception here. Its such a refreshing, new and different offering to what we have been able to provide for home owners before and I think that demand for the product is going to be very high indeed.

It follows the Rose Gold trend that has taken over other products such as smart phones, kitchen fixtures, home furnishings etc. Its a very popular option right now in those product groups, so it makes sense that it should follow into window and door hardware. Personally I love it and I expect it to be very popular this year.

This is a product which has already seen a big uptick in its popularity, but I think in 2020 we’re going to see that rise continue in a big way. One of the big changes in the last few years is home owner demand for more authentic looking window and door products has been on the rise. This is where vertical sliders tick that box easily.

So many homes would have been fitted with timber vertical sliding sash windows before colour was invented. Then PVCu came along and the character of so many homes were ruined by truly awful PVCu top opening windows, often too high for people to actually use! Over the past decade or so though we have seen a major increase in the demand for quality PVCu vertical sliding sash windows as home owners seek to restore their homes to some level of originality.

In 2020 I see this demand increasing further as manufacturers of the product seek to get out in front of installers and home owners too to make the most of the demand for more authentic looking products in a modern-day material. Although one of the most expensive types of window on the market, home owners do expect to pay more for a window of this type and I don’t see this as being a big barrier to the progress of the renaissance of the product.

I have written in the past how I believe that the future of the PVCu window lies with flush casements. I still believe that to be the case, and will be another hugely popular product in 2020.

Firstly its growing in popularity with home owners because they have a genuine alternative to chamfered or sculptured frames. PVCu can be accused of being chunky looking. You can’t call flush chunky really. Secondly, it provides a product option for home owners who want something that resembles something closer to timber, without it being timber. Add a coloured wood grain and timber-look joints and you’re on to a winner.

The more flush is installed to homes and the more installers publicise those installations on social media, their websites and brochures, the more it will continue to grow in popularity.

In the same way Rose Gold provided a genuinely new option within the world of hardware, the flush window has provided the first genuinely new window option for years, and home owners like it. Personally I think they’re easy to sell, and the USPs over traditional PVCu windows are clear and obvious. Yes they’re a bit more than normal casement windows, and there will be some home owners who just aren’t keen on the look of them. But already this year I have priced as much flush as I have traditional casements and I fully expect to sell much more of it than I did last year.

Hear me out on this one, some of you won’t agree. The glass conservatory roof isn’t dead. Yes the solid roof has been incredibly popular over the past decade, and I’m sure its going to be a good seller again this year. But a solid roof isn’t the right choice for everyone.

As I found out on an appointment with a customer earlier on today, when they had the chance to consider a solid roof for their existing conservatory, they had the choice to go for a solid roof, but chose not to. Primarily due to the major loss of light they would suffer from in comparison to their existing roof. They didn’t want their conservatory any darker, and they didn’t want their connecting kitchen and dining rooms to be any darker either. Yes you could put a bunch of rooflights in, or even glaze a large part of it to let light in. But if you’re going down that route you might as well opt for a glass roof in the end.

That is why I think that glass conservatory roofs and lantern roofs could be a popular choice this year. It helps that they are significantly cheaper than a solid roof, which is going to be useful if the UK finds it’s economy stalling this year. But we’re being told more about getting more natural light into our homes. Well a glass roof is a good way to go about it.

They’re self-cleaning (supposedly), you get the full view out of the roof, the modern glass options are better from a climate control perspective, they’re quieter than old polycarbonate roofs, they let the light flood in to the conservatory and adjoining rooms. When you think of it there are still quite a lot of reasons to opt for a glass roof or lantern roof.

We sell more glass roofs than solid roofs at our place, despite offering both. Home owners once explained about how it will affect the amount of light they will have are happy to go back to a glass roof option from a solid roof. They understand it will still get hot in the summer, but more often than not they don’t want to sacrifice the natural light.

What do you think to this list? Have I missed something off you think should be included here? All comments and feedback welcome via the comments section below.