The Olympic Opening Ceremony. Proud To Be British!

The Olympic Opening Ceremony. Proud To Be British!

I’m sure that every single one of you (well, almost) sat down in front of the TV last night to see what Danny Boyle had created to open the London 2012 Olympic Games. And my God, we were not disappointed!

The near 4 hour spectacular opened with a a portrayal of early British life pre-industrial revolution with fields, homes and people playing crickets and even farm animals! Just like a little piece or perfect Yorkshire! The ground however was torn apart after that to reveal Britain as the industrial giant that powered the rest of the world:

The hoards or volunteers dressed as workers, miners, and Brunel all helped create the perfect mini industrial Britain. Watching it all take shape was amazing. From what I could see everything was on time, everyone played their part with as much energy and pride as possible. The end of this section of the ceremony was a great British masterpiece:

For me, the most amusing and by far the most surprising was the Queen actually making an appearance as herself, with Daniel Craig playing his James Bond character! How Danny Boyle managed to pull that off I don’t know but I think for many of us that would have been the most enjoyable parts of the ceremony. If only it was the Queen jumping out of the helicopter… 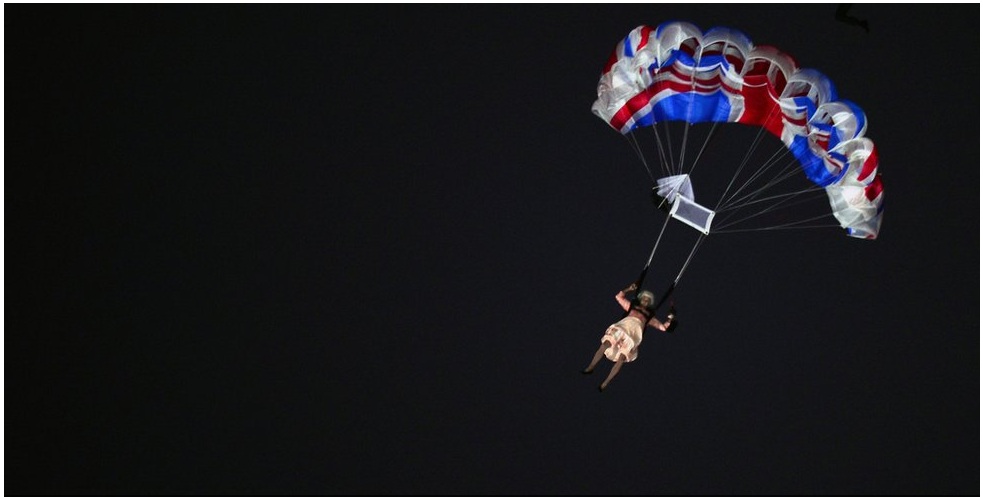 Then the teams came out. All 204 of them! This took quite a while. Too long if you ask me, but, getting most of the countries out into the centre of the stadium is going to take quite a long time. So I had a loo break and got into bed! Putting up with all the teams however was worth it for the end, and more specifically, the lighting of the cauldron. It was like nothing any other Olympics had ever seen.

With every team parading round there was a child with a copper petal. Each copper petal was then placed at the end of a pole within the centre of the stadium. Once all teams were out, 7 Olympic legends passed on the torches to 7 new British future Olympic heroes. They moved in to the centre of the arena with their torches to light the copper petals which then lit up one by one after. When all were lit up, the poles all moved up together to form one of the most stunning Olympic cauldrons in history. Such a thing of beauty, ingenuity, creativity, uniqueness and class…

Many people on Twitter were last night saying they were so mightily impressed, proud to be British. I can agree. Danny Boyle’s task was not to try and beat Beijing and in terms of sheer numbers, China weren’t going to be beaten. Boyle had to create something which showed the best of Britain. Yes, I get the point about parts of the world not really understanding some of the cultural references, but then again, whatever country held the games, parts of the ceremony wouldn’t be understood by everyone, so get over it!

Danny Boyle helped demonstrate with this ceremony how Britain can really produce something jaw dropping, something we can all be proud of and make us say, “yes I’m British, and yes I live in one of the greatest countries in the world!”

I loved it, and I hope the 27 million people who watched it last night loved it too!

Makes a change from the last government running the country into the ground then.

It was better than Trainspotting and Slumdog Millionaire.