This will most likely be the last update to this series for this year, as we finish the last major aesthetic task of our own home improvement project before Christmas.

Our final task to make our garden look presentable for guests was to sort our back wall out. For those who have been keeping up with our progress on our own project, you’ll know that our back wall, once enclosed by a hideous excuse for a conservatory, has been an eyesore for much of this project.

It feels like it's been a bit of a long wait to be able to bring you my latest update in this series charting [...]

Big progress has been made on my own home improvement project in the last week. If you have been following this mini-series of posts, you [...]

There has been steady progress in the building phase of our home improvement project, so I thought it might be a good time to give [...]

This weekend I have been busy ditching the keyboard and picking up the tools to make some more progress on my own little home improvement [...]

As some of you may have seen on Twitter on Sunday evening, I posted a picture of my soon to be demolished, very tired looking [...]

Just to explain what is going on with that back wall if you have just flicked through the other parts of this series. I took the plaster from the back wall, as it was going to be open to the elements so I obviously couldn’t leave it on there. Out of the whole project it was probably the least enjoyable task. Extremely hard work. Dust everywhere. Everywhere!

I got off as much as I could, and left it in a state where my builder could start his work on the patio, and where our fitters could fit the Prefix Systems Verandah soon after. But then I had to revisit that wall. It looked bloody awful. I chipped off as much as I could. I washed it in brick acid, to no avail. I didn’t really fancy external render. Not a massive fan of it. So the last resort was to paint it.

We talked at home about various colours and what might work with the Black powder coating of the Verandah and the random colours in the Indian stone. So we opted for a very light Cream colour. What do you think? 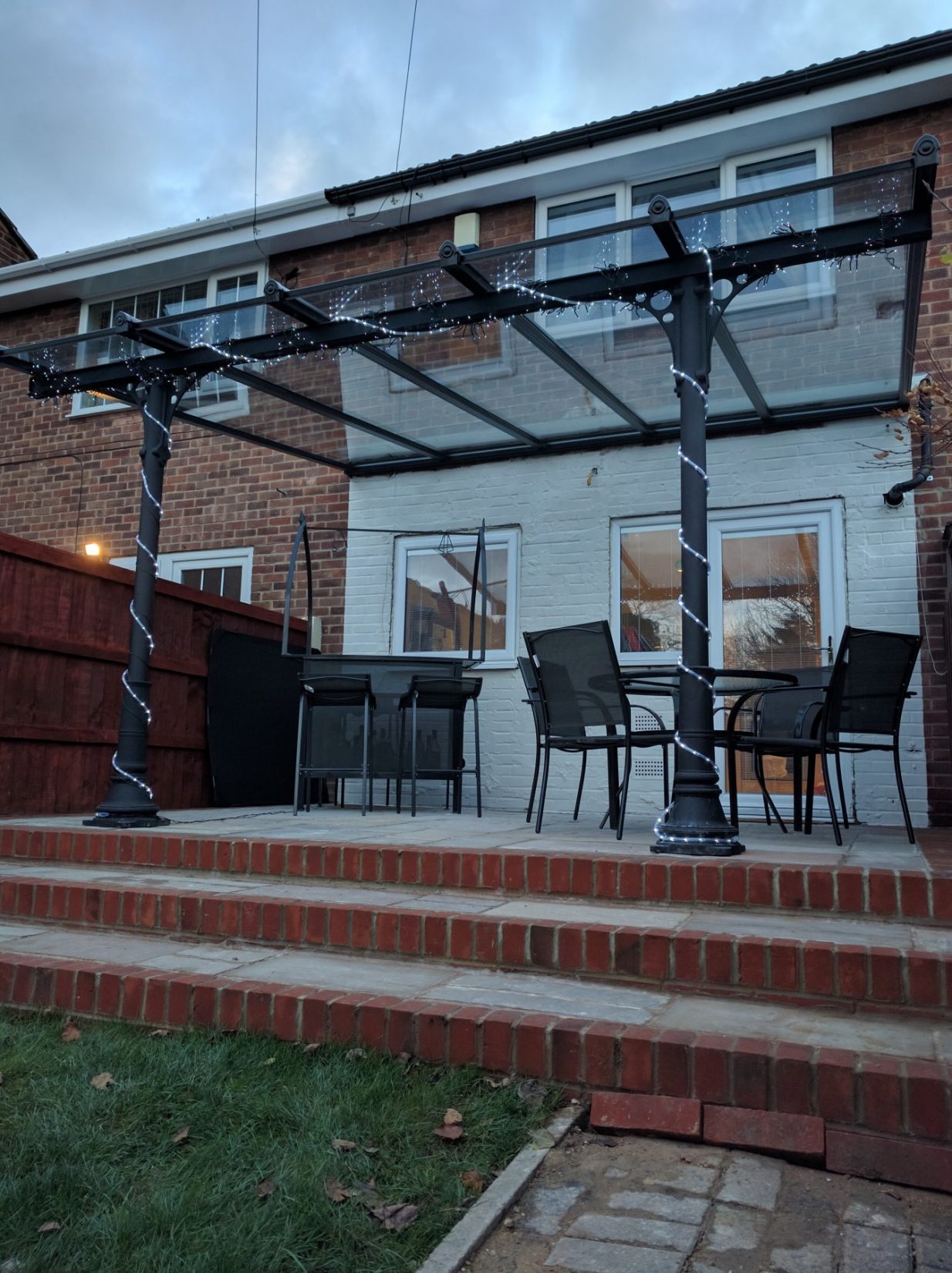 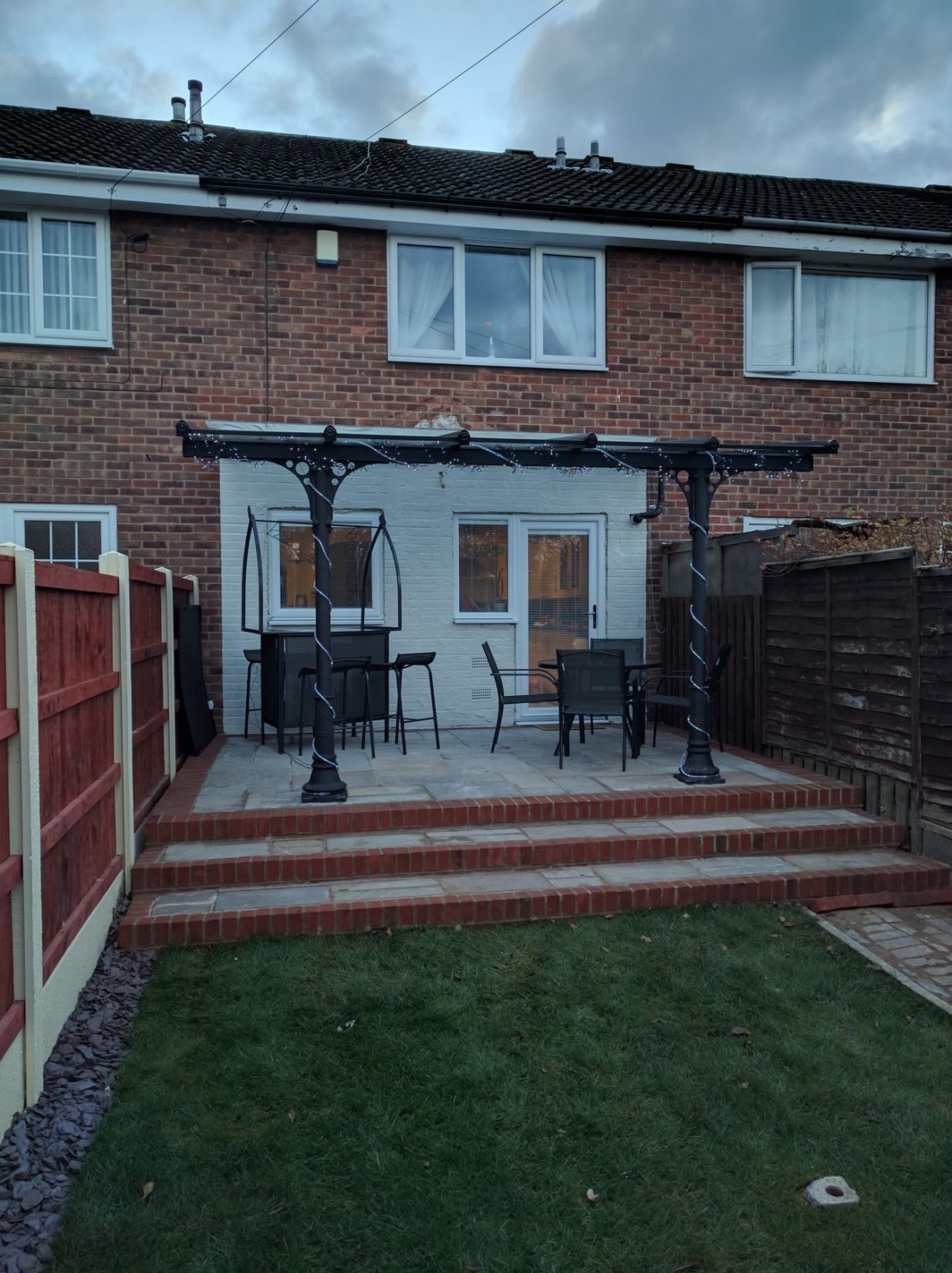 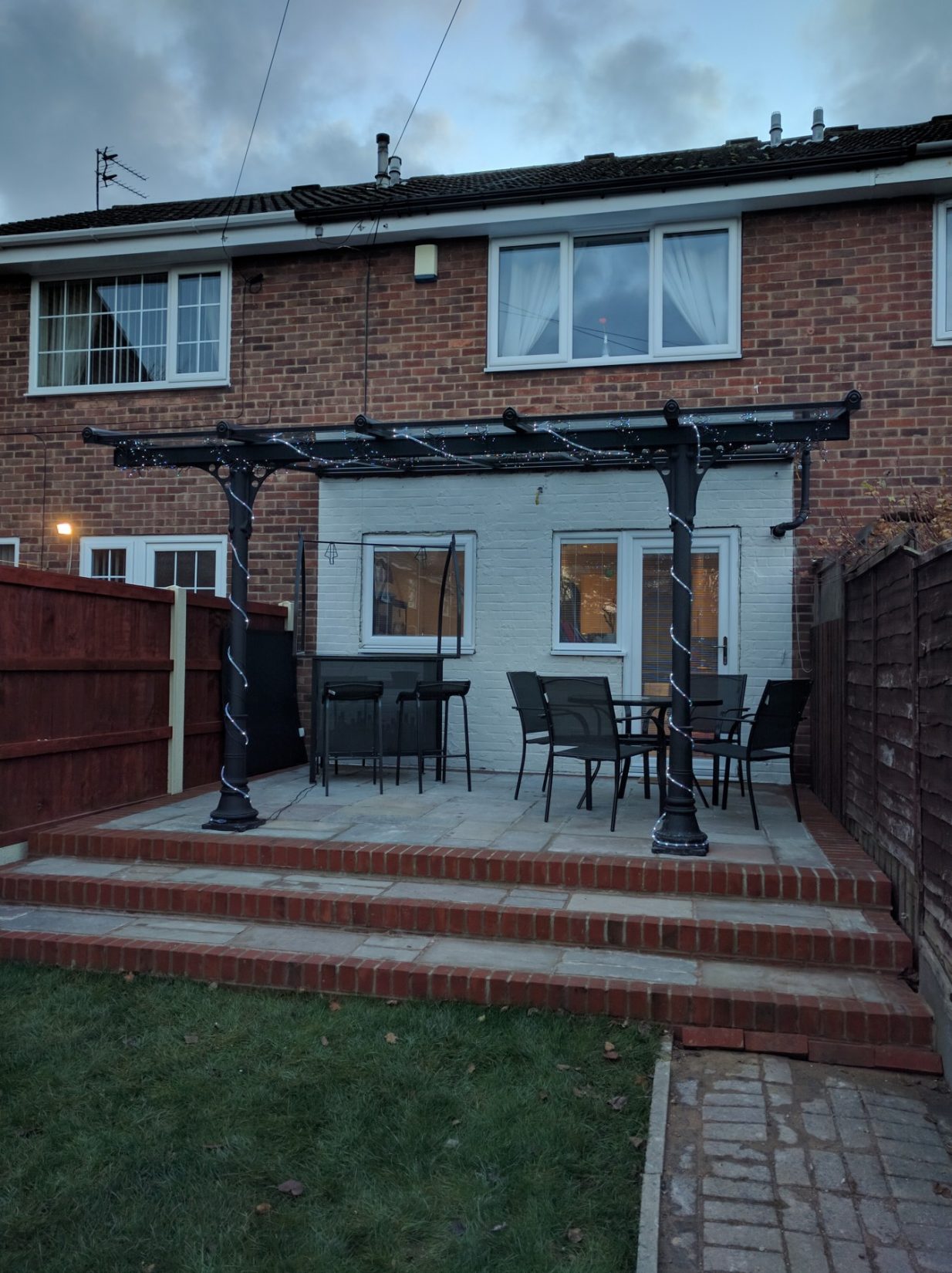 I posted some of these pictures on social media and got mixed responses. Which is fair enough. Some liked it, some thought it should be rendered and then painted in a pale Grey colour. I’ll be honest, me and Soph are a bit unsure about the colour. We thought it might work in our heads, but we’re 50/50 as to whether we like it or not.

I don’t think I’ll have it rendered. It’s a messy job and I don’t want to risk any damage to the patio or the Verandah. Also, we may not be here for all that long, and I may not want to sink too much more money into the garden if HS2, which may come very close to our house, forces us to move earlier than planned. It might go pale Grey in the Spring though. We’re going to live with it for a while though, to see if we get used to it. If we end up being OK with it, then we’ll put another coat on it. We only got chance to put a single coat on on Sunday as it was pretty chilly and took a while to dry, so we ran out of time.

However, we now have it to a standard where we’re happy to have people see it. Table, chairs and bar are now in their final positions. Protective covers are taken off from the windows and door. It’s all been cleaned, brushed and swept. We’ve even gone and got some Christmas lights adorning the Verandah: 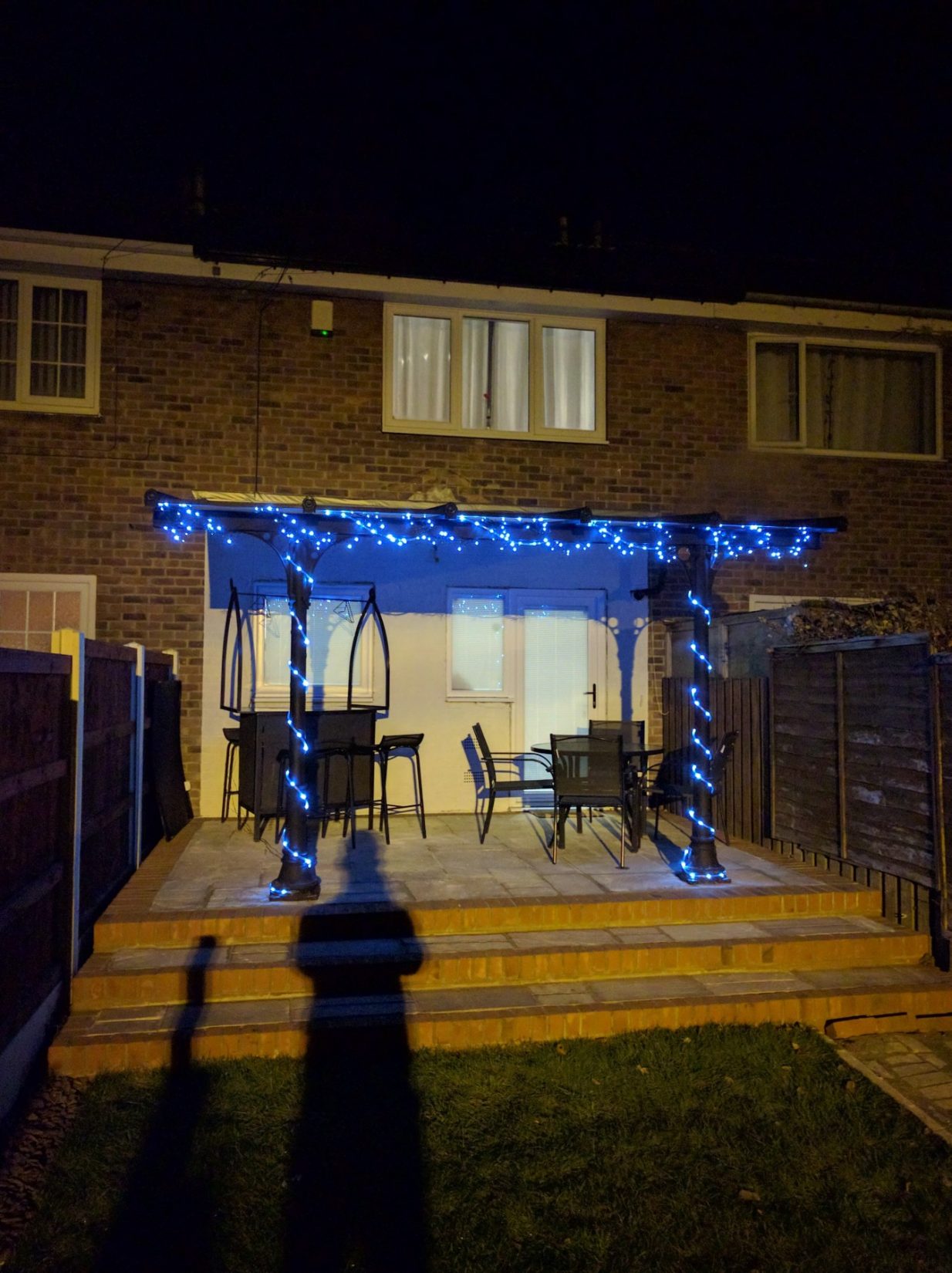 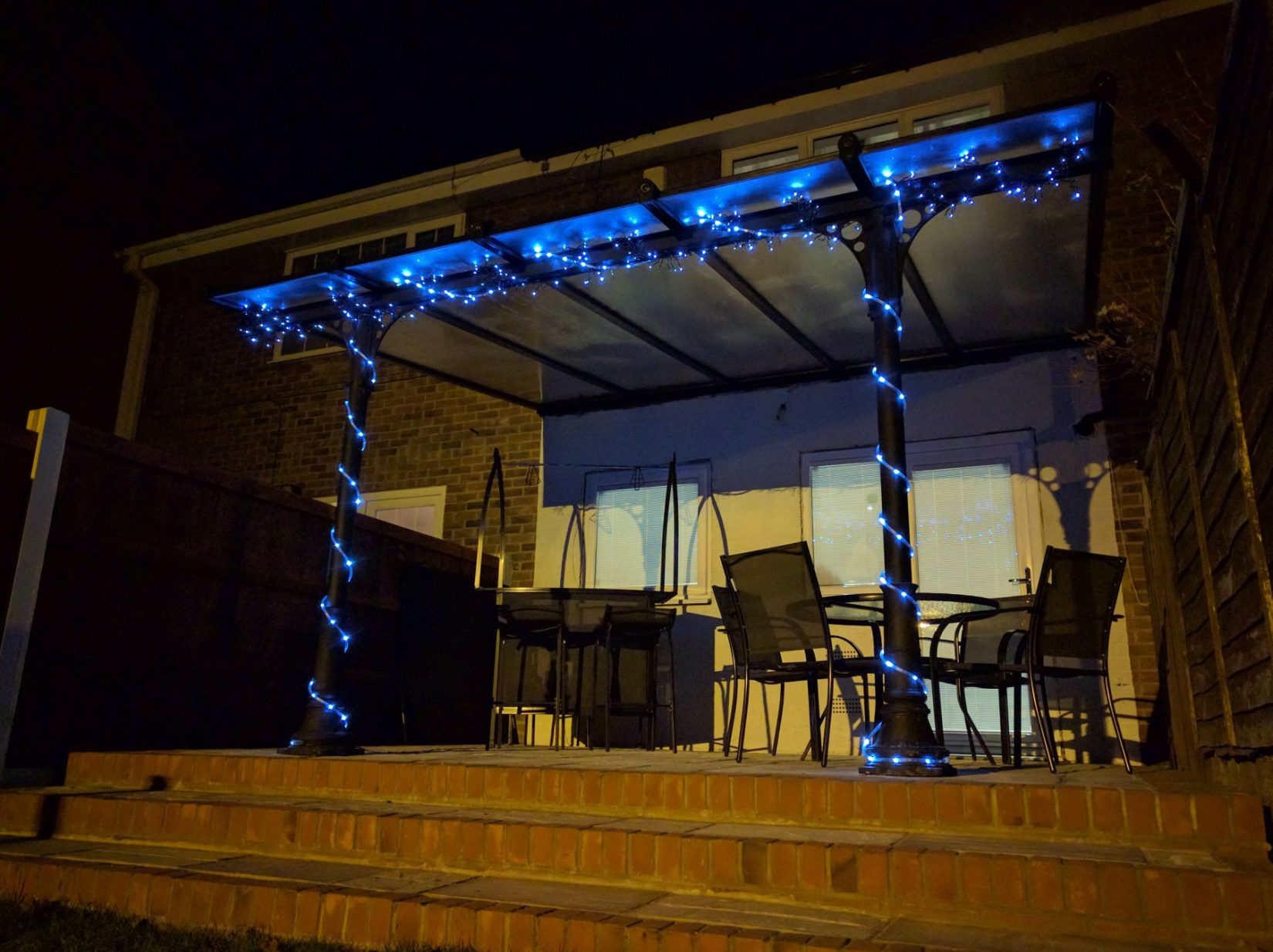 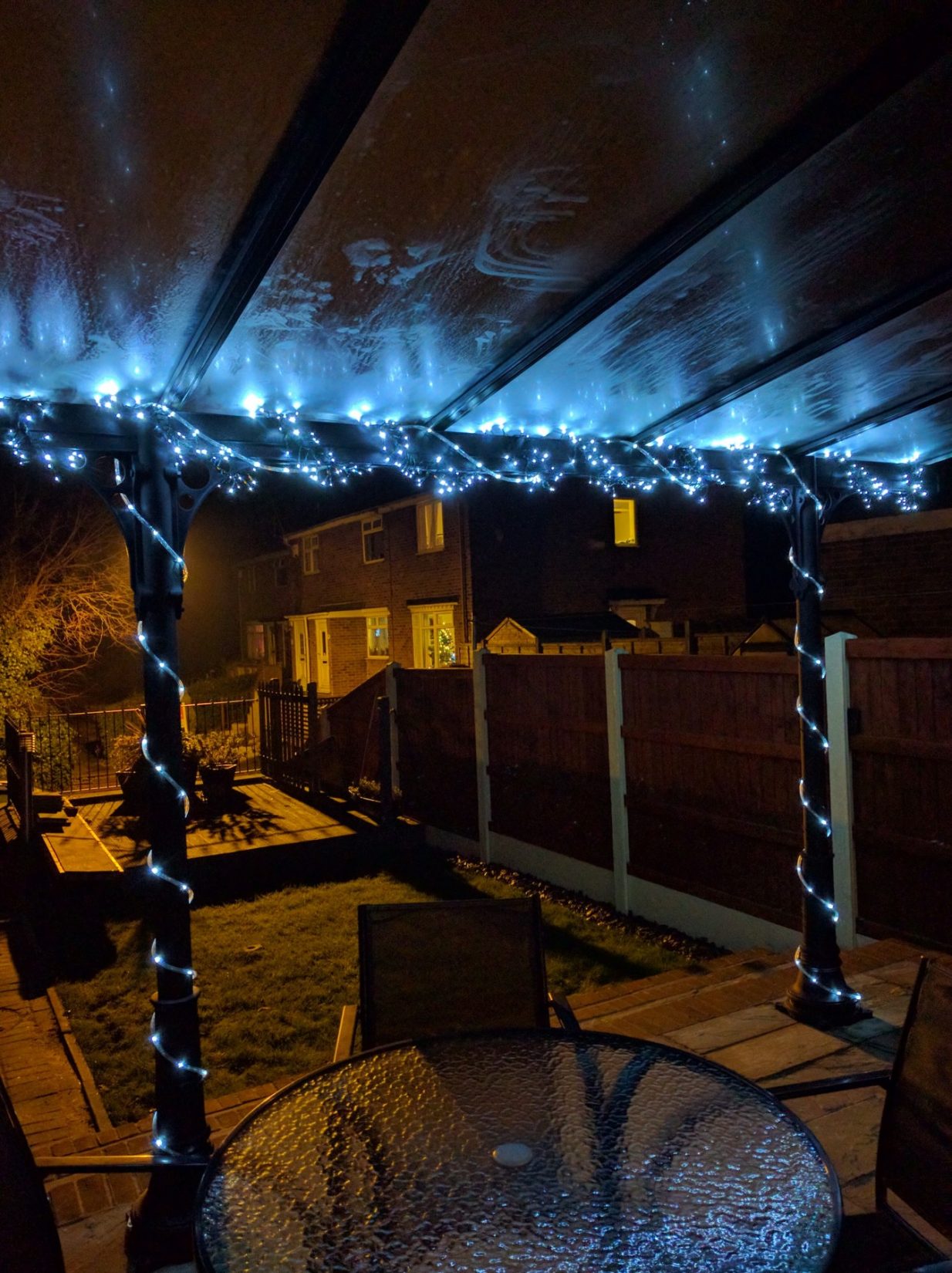 I think it looks stunning at night with the lights wrapped about the posts and ring beam. We may just add an outdoor Christmas tree to sit between the larger kitchen window and flag window, but then leave it there.

Once Christmas is over, we may hang some warm outdoor lights on a permanent basis. I’ve seen it at a mate’s house and it looks really nice, and it’s great for entertaining.

But in terms of work, I’d say that we’re done for the year now, and we’re going to have a rest from outdoor work. It’s been a hell of a transformation: 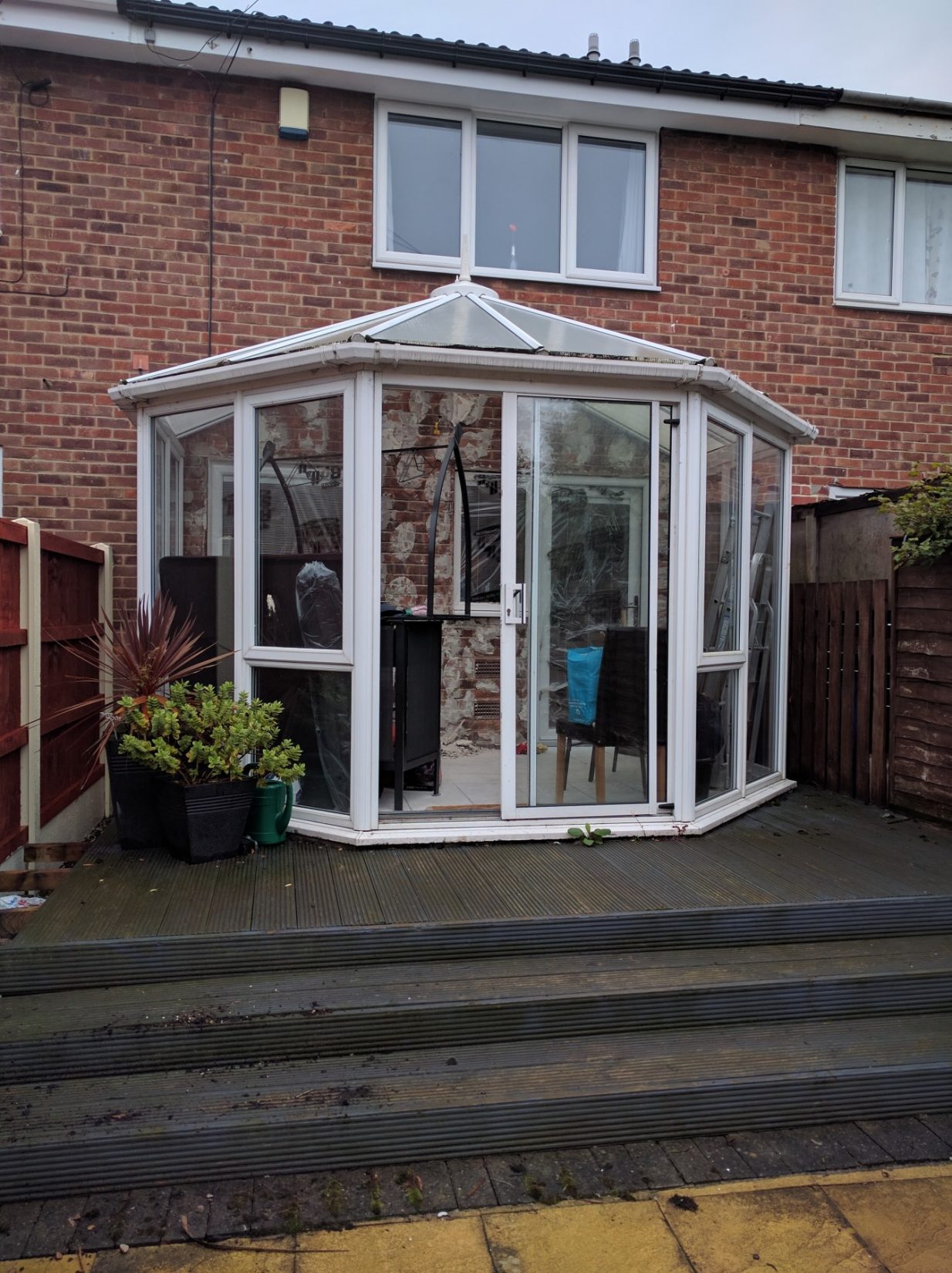 Once we have got the New Year out of the way, we’re going to start the path and steps on the right hand side of the images above. They’re still the badly laid bricks left by the previous owner and need to be done in the same Indian stone as the patio is. That should looks a lot neater and much more presentable. Then it’s likely to be the fence, also on the right hand side of the image above. It is seriously shabby and needs to be done in the same way as the left hand side. Assuming it isn’t blown over before we get chance to replace it! Finally, there is an area of decking that is likely to be painted again in the Spring. I can’t justify the high costs of composite decking for what is really a small area. I don’t think stone is suitable as a replacement either, so painting the current stuff it is. I may replace the iron railing that are currently there for some sandblasted glass and steel balustrading if it looks like we’re going to be staying for a little while longer.

But the biggest chunk of the work is now complete and we now have a garden we can feel a lot more proud about and be happy to have guests in. A big thanks to Prefix Systems for supplying the superb Verandah. It really is fantastic when it’s up, and something I think we should all be looking to add to our product portfolios.

Looks fantastic!…. wouldn’t it be nice if there was a balustrade that matched your stunning Verandah… ;)

Talk to me Anthony!