If you have shares in UK fenestration companies, you’re going to want to hope you had some kind of interest in Eurocell. The share price for the company has been on an absolute tear since the election result was announced, reaching multi-year highs in virtually no time at all.

For the past three and a half years not a single person in this country could have predicted what lay ahead in the next few days, never mind weeks or months. Its been the most turbulent time I can ever remember.

As we know, the election in December was more than decisive. It was said that a win, a return to normal functioning government with a working majority would bring clarity to the whole situation, Brexit and beyond, which would finally let the UK get back into gear. Boris won big.

It brought clarity. We knew that we were finally going to leave thr EU at the end of January. We knew that negotiations could start on a trade deal with the EU. We knew that it would either end in a deal or not. These are things we know. And when we know things, people and businesses can start making decisions again. I am already seeing evidence of this at our place.

When it comes to large companies in big ticket industries, such as systems companies in fenestration, the effects of uncertainty can be major. Decisions on spending and investment get put on hold. A stagnant economy hits them in their pockets. Big companies need the public to be sure and confident if they are to keep spending. Investors in big companies look for the same.

Companies like Eurocell are a major part of the fabric of the home improvement sector. They’re also traded on the stock market. If investors think things are slowing down, or the economy is going to hit a rough patch, home improvement manufacturers, being what they are, won’t see investors and traders looking their way.

But when things appear to be clearer, and the path forwards looks more positive, then thats very different. This is the Eurocell share price over the past few months, I have highlighted the time of the election: 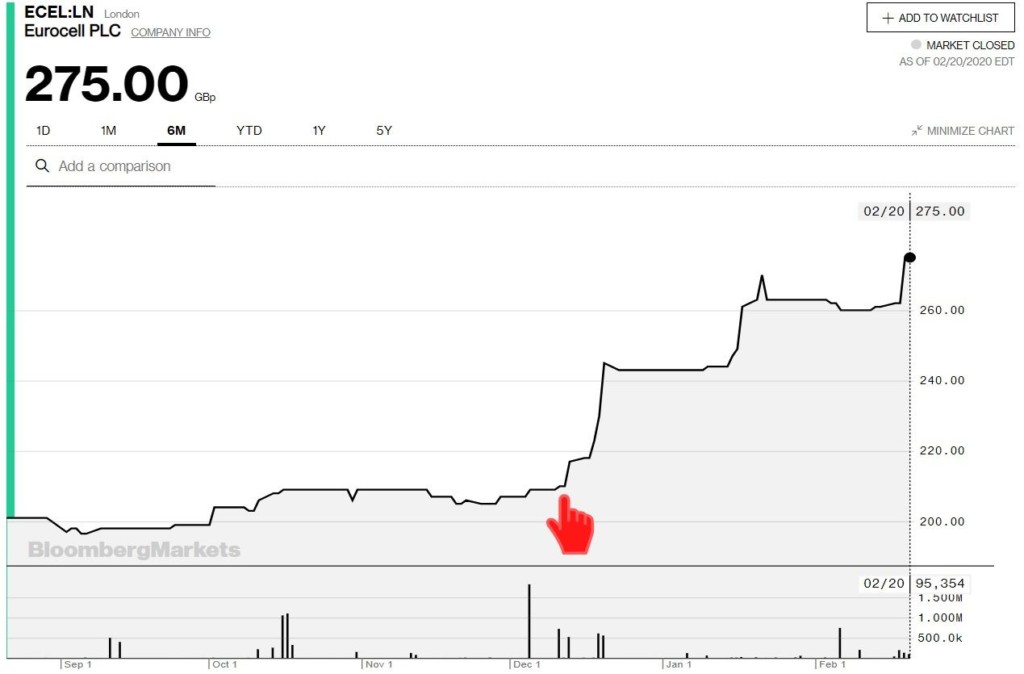 Eurocell’s share price is at multi-year highs. But look at how quick the rise in the price was. After a lot of drift in the months previous, its as though the shares were given a steroid injection!

I can only imagine that this rapid rise is down to the election result and investors believed that now the road ahead is clearer, now is the time to seize an opportunity in the hopes that the UK economy is going to perform better.

Its not just Eurocell. If you look at Epwin’s share price they have been on a long winning streak as well in recent months.

I have been having a few conversation with my industry friends, across different parts of the industry, and there is a marked change in the tone of conversation and the general commentary. 2019 was hard, it was obvious, and no matter who I spoke to everyone said the same. Up to press this year, there is a lot more positivity about the place, which is great to see.

I believe that the performance os the Eurocell share price is a symptom of a more positive outlook on the whole. I appreciate that its not been all plain sailing. A large number of companies have had to close their doors at the end of last year and the start of this year. And the FIT Show has been moved to 2021. But, the rate of company closures does appear to have slowed somewhat, and the reaction to changing the exhibition to every two years has been met with massive positvity, with a number of large companies quickly signing on to the 2021 show already.

Of course things can change during the course of the year, and our industry still faces major issues in the form of the skills crisis, product quality, customer service etc. However, what I would say, is that the new coronavirus is a threat that we could not have imagined even on New Years Day. This could bring large disruption to our supply chains, movement of people around the world and even limit the possibility of Chinese companies attending fenestration trade shows into the long term.

For now, lets reflect on some positivity and enjoy the calmers waters that lie ahead.