The 2020 Spending Review – What You Need To Know

The 2020 Spending Review – What You Need To Know

On Wednesday the Chancellor Rishi Sunak gave his Spending Review for 2020. It was due to be a three-year forecast for public spending and finances, but due to the scale of the economic damage and uncertainty caused by the pandemic, the review only set out the road ahead for one year.

It was also our first opportunity to see in better detail the damage the pandemic has brought on the UK economy. It didn’t make for good reading. These are the key points you need to know from the 2020 Spending Review.

We knew that levels of borrowing were going to be extraordinary as the Government has been sustaining much of the economy since March. Yesterday we found out the true scale of the borrowing for 2020. 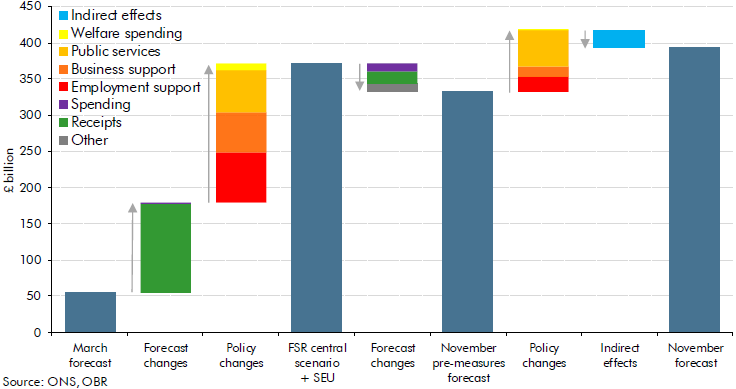 Look at the March forecast on the left, then look at where we are now on the right. To put this into some perspective, Government borrowing is TWICE what it was during the financial crisis over a decade ago. It took the best part of a decade to recover from that. Back then, the coalition and then Conservative governments took an austerity approach that pretty much balanced the books more or less but exacerbated inequalities in society. Rishi Sunak and Boris Johnson have both promised that austerity is not the answer to this recovery. They know that if they did follow the same path then they would almost be guaranteed to lose the votes they won in the north of England in the 2019 election. However, it does look like tax rises in the coming years will be the method used to pay off this huge debt. It may take a decade, maybe even longer to get back to levels of public borrowing pre-COVID.

Gross Domestic Product is how you measure a nation’s output. The central forecast from the OBR is that GDP in the UK will drop by an eyewatering 11.3%. To give you some context, this is the worst drop in GDP in this country for over 300 years. You have to go all the way back to 1709 and the Great Frost to see a similar drop in GDP.

This, however, is a central forecast from the OBR. This chart shows the range of the path ahead: 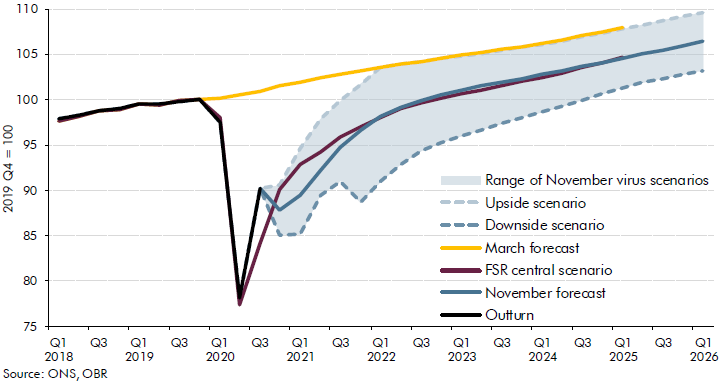 What this shows is not a V-shaped recovery, but something like a Nike tick recovery. Where you have a bit of a snapback in the immediate aftermath, but with the recovery slowing up the further down the line you get. What the above chart also shows is permanent scarring to the economy. In 2025 UK GDP will still be down 3% compared to where we would have been had there not been a pandemic. This is their base case. But as you can see there is an upside and downside scenario. You would hope we get somewhere closer to the upside, but there is also a risk that we end up nearer to the downside which would result in more long term damage.

There is also one big caveat that wasn’t mentioned once in Rishi Sunak’s speech and that is Brexit. The OBR has stated that should the UK and EU end the transition period in just over 30 days without a trade deal then there will be a 2% hit to GDP in 2020. So that recovery of 5.5% is shaved down to just 3.5% and would make the recovery from the pandemic even longer. The pandemic has taken up all the oxygen in the room for nearly the full year, but as we approach December and if there is still no sign of a trade deal then it’s going to be a very fraught and messy end to the year.

Domestically though, unemployment is perhaps one of the more serious measures of an economy. The OBR has forecasted 2.6m to be out of work by Q2 of 2021. This is an unemployment rate of over 7%. This is high. Not as high as once feared, as the Government has extended furlough where previously it wasn’t. But it’s still a significant number and will be a drag on the UK economy for many years to come.

The Chancellor announced a pay freeze for some public sector workers, a rise in the national living and a cut in the foreign aid budget to 0.5%. You can find a full breakdown of the announcement here.

The OBR also expects house prices to fall in 2021 and 2022. It would mark the end of a long period of growth, bolstered this year with the stamp duty support introduced by the Government earlier on in the year.

In his statement, the Chancellor explained that whilst we’re still in the middle of the pandemic, the economic crisis has just begun. He announced nothing in the way of tax increases, but it is expected to be on the cards as the Government has promised not to return to austerity. The only other way to try and begin to balance the books is tax increases. It looks like we’re in for another long haul of a recovery.