When It Comes To Building Regulations, It’s All About 2025

When It Comes To Building Regulations, It’s All About 2025

In just a couple of months, the fenestration sector in England will be required to comply with newly updated Building Regulations. Amongst the various changes, the two that are of most scrutiny have been ventilation (Part F) and conservation of fuel and power (Part L).

Yet, as our sector scrambles to understand what the changes mean for business, the real and most significant changes are about to happen just three years away with the Future Buildings Standard.

When it comes to research and development, three years is not long at all. It takes time to develop new ideas or adapt existing ones, test them, revise them, test them again, plan for production, marketing and all else in between.

This is why it is important we understand what the roadmap in the short term actually looks like. This is a table, published by the Government, which shows what buildings and when will be affected by either updated Building Regulations or Future Building Standards legislation: 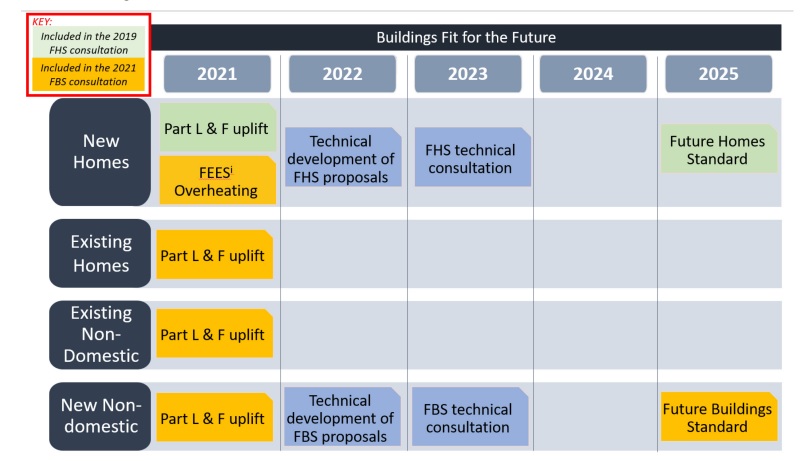 You can see that both new homes and new non-domestic buildings, so commercial use buildings, will be affected by the Future Buildings Standard. Why is this important? The aim of FBS is to see the overall u-values of windows going into these homes reduced all the way down to 0.8. For context, as of June 15th, windows fitted must be 1.4 or better. 2025 regulations into new homes will see a 0.6 reduction, which in three years is a bold move downwards.

The table shows that existing homes won’t be affected by Future Building Standard regulations. However, we are all fully aware that where regulations in new builds start, it’s not all that long before they follow into existing homes. Even if existing dwellings aren’t affected by FBS, I would expect that Building Regulation revisions will still see u-values lowered anyway.

Either way, with the Government wanting to build at least 300,000 new homes per year, and a gargantuan task of retrofitting tens of millions of homes to reach net-zero by 2030, the fenestration sector is going to have to move rapidly to be able to meet these new requirements.

It will also have no time to fight them. We did such a poor job in coordinating a response to the 2022 revisions to Building Regulations, that the prospect of the sector coming together to fortify a single position and voice is laughably impossible. Therefore, time would be more productively spent on understanding the trajectory we’re on in terms of regulations and figuring out how to turn it into opportunities rather than something to rail against.

For example, how good would it look to the general public to show off an entire sector that rose to the task of climate change and was able to say that all new windows would meet the FBS minimum u-values by 2025 and that UK fenestration is doing what it can to limit its carbon footprint on the planet?

Serious investment in R&D has to happen now though. It takes years to develop products right so we have to look beyond this year’s changes and look toward the ones that will have the biggest impact.

The good news from this round of changes to the regulations is that with new u-values set at 1.4 many existing window systems will already meet that new standard. It means fabricators and systems companies have not had to worry too much about their existing product suites and can focus more on the ventilation part of the changes.

This breathing space isn’t going to last all that long. By 2025 many will need to meet 0.8 which is going to require some major changes to many window systems. Money is going to have to be spent on finding out the best route to 0.8.

At the moment, there are two solutions that could get us to 0.8. We either go down the triple glazing route or explore the emerging vacuum insulated glazing technology that is beginning to make its way into the UK market via companies like Masterframe.

Right now, vacuum insulated glazing is more expensive than triple glazing. However, the technology is in relative infancy, and over time will become cheaper the more it is used. But when I think about the two options, the economic argument has to take centre stage if the overall aim of any new regulations is to be better for the environment.

Take a look at this comparison courtesy of Energlaze UK, who are using Fineo VIG by AGC: 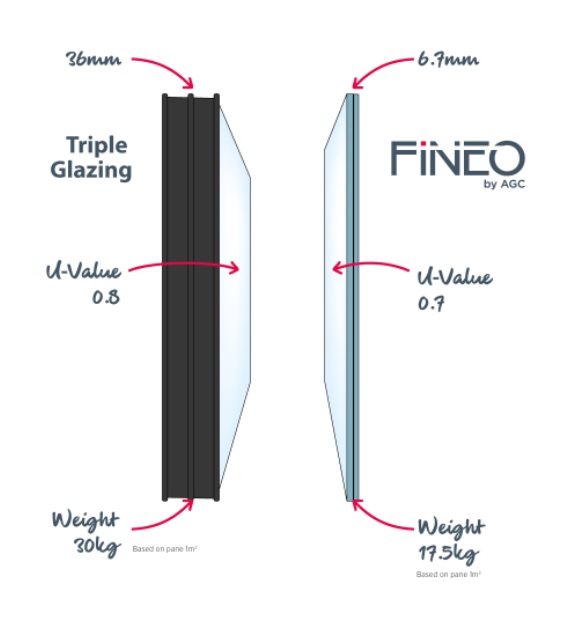 You can find out more about VIG here. Less weight. Less material used. Less weight on vans and trucks during transportation. More storage space available in warehouses. Less strain on installers. Less strain on window hardware. Think about the money you would save by not having to adapt your business to accept something heavier and bigger.

If you’re a spacer bar company or involved in making glass, you’re going to want triple glazing to win the day, however. If VIG takes off in any significant way then it will start to harm sales of spacer bars. And if you’re one of the three major glassmakers you’re also going to want to see triple glazing come out on top. So what we’re going to see over the next few years is a big tussle between proponents of both. One side to keep the business they have, the other to make inroads and create a new niche within our sector.

No matter what side of this debate you sit on, the fact remains: investment is needed now to be able to prepare in good time for changes coming in just three years’ time.