Incorrect slider name. Please make sure to use a valid slider slug.

Welcome to the trialing of a new feature here on DGB where every Saturday I’ll be taking a look back over the topics covered on the site each week and have a look at some of the other stories worth reading from the UK fenestration industry. If it gets decent reading, I’ll happily continue to do this on a weekly basis. So let’s start off…

Incorrect slider name. Please make sure to use a valid slider slug.

As always at the start of a new month I always post a review of the month gone by, both from a personal business perspective and a wider industry perspective too. August was a bit of a slow one compared to the rest of the year so far, but then again that always seems to be the case doesn’t it?

As the school holidays started to draw to a close and the parents came back from holiday tanned and stressed. Attentions started to turn back to life at home and more on to the tasks that needed doing before the weather became too cold to tolerate the cold. Sales overall for us was up on July. At the moment we’re still trading about 8 weeks in front of where we were scheduled to be at this time of year. That means two things. Firstly, we can handle a couple of weeks of slow business should that happen – though we doubt that it in the cards. Secondly, we’re due to smash our target potentially at the end of this month, or more likely the middle of October. Either way, 2014 is set to be a great year.

Barring the current crisis in employment levels, which we’ll cover in a bit, I still believe 2014 will go down as one of the most notable and successful in this industry for a while.

This was a guest provided by Sales & Marketing Director of VEKA Colin Torley. As a Scotsman, I approached him to get his views on what he thought an independent Scotland would mean for him, his country and our own industry. A great article and it gave us a real insight into his own thoughts on Scottish independence.

If Scotland does decide and it becomes an independent country, how will this affect our industry? Will the Scottish Government place a tax on imports into Scotland? This has never been mentioned, and why would it be, but if this happens then this would mean that all the system companies, most of the hardware companies etc.  who are all based in England would have to increase prices to meet any increase in tax duty so how will this affect our customers. It shouldn’t really as everyone would have to raise prices by the same amount.

The issue of Scottish independence raises more business problems than we can probably imagine. In his post Colin does bring to the fore questions about import taxes, the purchasing of more windows in Scotland boosting the Scottish economy. Away from this, there have been more serious questions asked about the debt held by Scotland. Some are saying that they could default on their debt should they pull away from the UK, effectively start from a clean slate. Clearly the rest of the UK wouldn’t allow that to happen. There is a lot still to consider. But time is running out and the polls show a clear narrowing between the yes and no campaigns. It’s going to be a close one.

Embrace Recycled PVC, Before It’s Forced On Us

Tuesday I tackled the subject of recycled PVC. The idea came to me as we saw the EU wage it’s war of red tape on the vacuum industry, with hairdryers next in their sights. They seemingly want to ban everything high powered to try and save a few quid here and there. Do I agree? No. But what can we do, we’re part of this thing, we have to comply. Anyway, it got me to thinking about the stat of our own industry and if it would be all that long before the EU looked at the way we operate and force us to change.

It’s time to accept that recycled PVC is going to become the norm rather than a novelty. Virgin PVC is going to price itself out of the market at some point in the future. Now some are already embracing the idea of recycling. Take Eurocell for example. They have their own mega recycling facility in Derby capable of processing 12,000 post consumer waste frames per week. Their new Modus range contains 50% post consumer PVC in the product. It’s not just Eurocell. VEKA also have their own dedicated recycling facility and nifty pick up system which is designed to prolong the lifespan of PVC for as long as possible. You can read more about ithere: http://www.vekauk.com/profile/trade/veka-recycling.html

There are a few 100% recycled windows out there. Profile 22, part of the Epwin group, does have a 100% fully recycled window out there. But how often do you hear of it? Not much I bet. And there’s the problem. There simply isn’t an appetite, as far as I can see, for the industry to really push such products. I think we’re missing a trick by not doing this though.

The industry is trying to improve it’s image in the public eye. Why not show off it’s greener side and make a bigger deal of the more environmentally friendly options out there? Either way, I don’t think it will be too long before the all seeing EU eye on Mount Brussels turns it’s glaring eye on to us.

This Is The Biggest Threat To Our Recovery

By far and away the most read post on DGB this week was my story on the lack of investment in staff starting to cause real headaches across most parts of our sector now.

With the industry really starting to make hay while the sun shines, recession levels of staff in many areas are starting to cause more serious problems. This week I saw more than a few accounts publicly and privately complaining of repetitive and disruptive issues that was affecting their business through no fault of their own.

Some might say it’s a nice problem to have, having too much work. But look at the end results if whole industries aren’t prepared. Suppliers struggle due to low staff numbers caused by the recession. Mistakes made at supplier level have bigger consequences further down the chain, ultimately causing hassle for the end user. Stresses at installer level increase because time and money is having to be spent to rectify issues rather than focus on bringing in new business. You see where I’m coming from? The simple fact is if businesses invested in more staff, trained them and used them to help share the quickly increasing workload, then these issues might start to recede.

It was an issue discussed on Friday morning on Twitter. Another major problem starting to rear it’s head is also the very large percentage of the industry still not MTC compliant. This is despite two years of warnings and endless seminars and help sessions from the various industry bodies. I would guess that there are thousands of businesses out there operating illegally.

Before And After By Value Doors UK

Last but certainly not least, DGB hosted some before and after shots from DGB residents Value Doors UK. We all like to seem some good before and after action, we’re all doing it on Twitter! 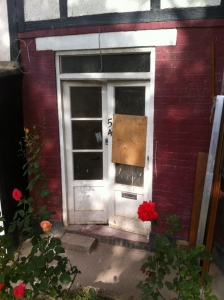 A traditional design with a contemporary hint, it looks a million times better than before. The top and side lights provide some extra light, and the old design in modern materials should provide the house with a stylish door for many years.

I always try and keep the sponsored posts interesting, and seen as though we all like to have a gander at a few doors, I thought this might be a good one to tackle. Those are some pretty tatty old wood doors though!

Elsewhere In The Industry…

Enjoyed that, keep it up but don’t kill yerself!

To be fair this was easy to write. That slider at the top took the longest time! Going to use that on each weekly review now.